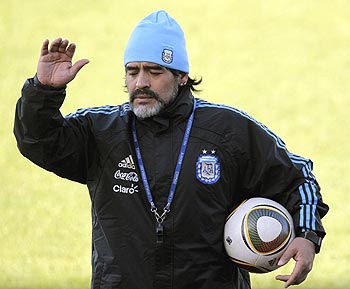 Diego Maradona clambered over reporters at a packed news conference on Saturday to embrace friend and former Napoli team-mate Salvatore Bagni before saying his Argentina team should beat Mexico at the World Cup.

A Maradona news conference at the World Cup has become a sideshow to rank with the progress of his "gala team" into the second round where they meet Mexico at Soccer City in Johannesburg on Sunday.

Central defender Walter Samuel is still being troubled by a niggling leg muscle problem that forced his substitution by Nicolas Burdisso in the 4-1 win over South Korea and Maradona said Burdisso would probably replace him on Sunday.

"If he is not 100 per cent he won't be able to give us the help we need," said Maradona, having returned to his seat in front of cameras and reporters from a bear hug with Italian Bagni, a media pundit at the tournament in South Africa.

"Even knowing him as I have done all these years, Diego always does something to surprise you," Bagni, who won the Serie A title with Maradona's Napoli in 1987, told reporters.

Maradona said: "I'm going to field the best team I have in respect for the (Argentina) shirt. I was always going to field my gala team (at the finals)."

Maradona said Mexico had a team worthy of respect but "they had better know to respect our history. Argentina have the wherewithal to go through.

"When the road narrows (into the last 16) history comes into play and I'm sure my players understood the message," said Maradona, who captained Argentina to their second title in Mexico in 1986.

"I've seen it all ... All my life I've picked up the experience that today I'm giving my players with all my soul and heart, saying to the lads 'that's how it was for me'."

He said, however, that Mexico "have a bunch of players that worry us. If (Argentine-born striker Guillermo) Franco doesn't play, that's better because they won't have headers."

Maradona said he thought Mexico coach Javier Aguirre would field Rafael Marquez in central defence "because against Uruguay he looked a bit lost in midfield." Uruguay beat Mexico 1-0 to win their group.

© Copyright 2021 Reuters Limited. All rights reserved. Republication or redistribution of Reuters content, including by framing or similar means, is expressly prohibited without the prior written consent of Reuters. Reuters shall not be liable for any errors or delays in the content, or for any actions taken in reliance thereon.
Related News: Maradona, Mexico, Salvatore Bagni, Nicolas Burdisso, Argentina
COMMENT
Print this article