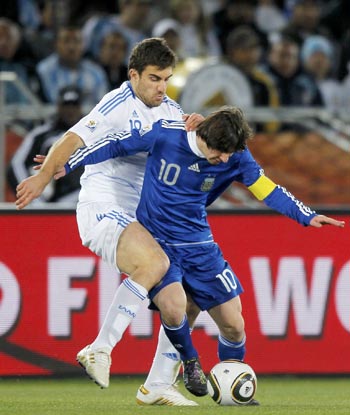 Lionel Messi became Argentina's youngest World Cup captain when he led his country for the first time two days before his 23rd birthday against Greece in Group B on Tuesday.

Coach Diego Maradona, who captained Argentina to World Cup victory aged 25 in 1986, made seven changes to the side that beat South Korea 4-1 five days ago, resting skipper Javier Mascherano and bringing back midfielder Juan Sebastian Veron from injury.

Greece coach Otto Rehhagel made two changes, bringing back Giorgos Samaras into the attack in place of Fanis Gekas and introducing defender Vangelis Moras in a tactical shift with Dimitris Salpingidis dropped to the bench.

© Copyright 2021 Reuters Limited. All rights reserved. Republication or redistribution of Reuters content, including by framing or similar means, is expressly prohibited without the prior written consent of Reuters. Reuters shall not be liable for any errors or delays in the content, or for any actions taken in reliance thereon.
Related News: Lionel Messi, Argentina, Juan Sebastian Veron, South Korea, Vangelis Moras
COMMENT
Print this article