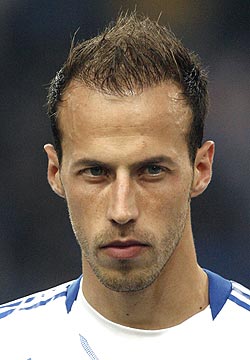 Greece central defender Vangelis Moras, still labouring with a thigh injury, is highly unlikely to feature in their opening Group B match against South Korea on Saturday, a team official said.

Moras, a regular starter in recent months having formed an effective partnership with Greece's other "Twin Tower" Socratis Papastathopoulos, has not trained in the past few days and was expected to continue receiving medical treatment on Tuesday.

"He is very unlikely to play against South Korea unless there is a last-minute medical wonder," the team official said.

The defensive gap will most likely be filled by experienced all-rounder Kostas Katsouranis who will move from his usual midfield position, as he did in training on Monday.

Striker Pantelis Kapetanos will also skip training on Tuesday as he tries to get over a minor knock but, like defender Sotiris Kyrgiakos, who trained separately on Monday, is expected to be fit for the match in Port Elizabeth.

Greece, in only their second World Cup, also take on Nigeria and Argentina in Group B.

© Copyright 2021 Reuters Limited. All rights reserved. Republication or redistribution of Reuters content, including by framing or similar means, is expressly prohibited without the prior written consent of Reuters. Reuters shall not be liable for any errors or delays in the content, or for any actions taken in reliance thereon.
Related News: Vangelis Moras, South Korea, Greece, Socratis Papastathopoulos, Kostas Katsouranis
SHARE THIS STORYCOMMENT
Print this article