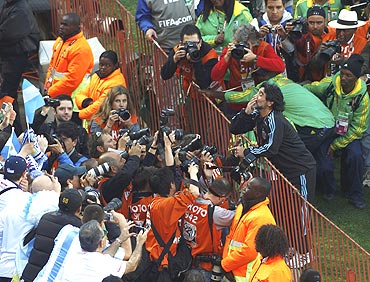 Argentina's Diego Maradona hugged Nigerian players and blew kisses to the crowd during a lap of Johannesburg's Ellis Park stadium an hour before his squad kick off against Nigeria on Saturday.

Maradona crossed himself as he stepped onto the pitch, clutching a gold rosary and beating his chest.

Maradona returns to the World Cup stage as Argentine coach 16 years since his last cap - also against Nigeria - in the United States. He was sent home soon afterwards for failing a doping test.

His chest puffed out, Maradona sported his new-look greying beard, which has chimed well with an apparent mellowing in his sometimes-fiery temperament.

Holding his hands behind his back he strolled around the pitch an hour before kickoff, stepping over advertising hoardings to blow kisses to his daughter and grandson, whose father is Argentine forward Sergio Aguero.

© Copyright 2021 Reuters Limited. All rights reserved. Republication or redistribution of Reuters content, including by framing or similar means, is expressly prohibited without the prior written consent of Reuters. Reuters shall not be liable for any errors or delays in the content, or for any actions taken in reliance thereon.
Related News: Diego Maradona, Ellis Park, Sergio Aguero, Nigeria, United States
COMMENT
Print this article

Not party to Bharti-Zain deal: Econet