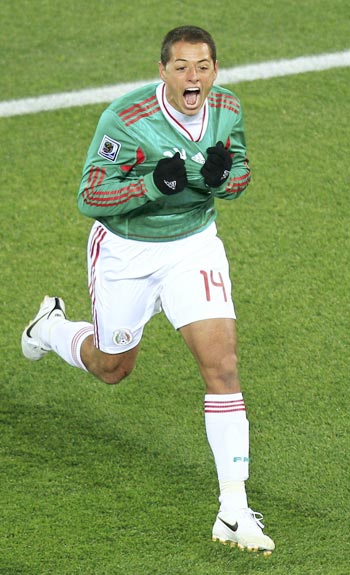 Mexico's Javier Hernandez literally followed in his grandfather's footsteps when he scored in the World Cup finals against France on Thursday.

The young forward's grandfather Tomas Balcazar scored the first goal against France in 1954 World Cup, way before Hernandez was born, but the 22-year-old knew all about it.

"Yes, I just remembered that now in the dressing room. I hope I can speak to him soon," the beaming striker told a news conference after his country's 2-0 win over France.

Hernandez has had a whirlwind few months after gaining selection for the national side, completing a transfer to Manchester United and now scoring in a World Cup.

But he displayed down-to-earth qualities as he faced the media after the game.

"Thanks to my family, I am what I am on and off the pitch," he said.

© Copyright 2022 Reuters Limited. All rights reserved. Republication or redistribution of Reuters content, including by framing or similar means, is expressly prohibited without the prior written consent of Reuters. Reuters shall not be liable for any errors or delays in the content, or for any actions taken in reliance thereon.
Related News: Javier Hernandez, France, Mexico, Javier Aguirre, Tomas Balcazar
COMMENT
Print this article