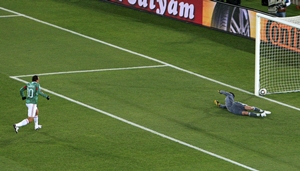 France face an embarrassing early World Cup exit after a surprise 2-0 defeat to Mexico in their second Group A game on Thursday.

Substitute forward Javier Hernandez beat an off-side trap, raced into the box unchallenged and twisted his way past France keeper Hugo Lloris to put Mexico ahead on 64 minutes.

Veteran forward Cuauhtemoc Blanco doubled the advantage from the penalty spot on 79 minutes after Pablo Barrera was brought down by Eric Abidal.

In the day's earlier matches, Gonzalo Higuain scored the first hat-trick of this World Cup as Argentina took a huge step towards the second round by thrashing South Korea 4-1 in their Group B match, while Greece rallied from a goal down to beat Nigeria 2-1.

Otto Rehhagel's men beat a ten-man Nigeria to record their first ever victory at the finals. .

France, the 1998 champions have just one point from two games before facing hosts South Africa in their final pool game next week. Even a win might not be enough for them to qualify and escape another disaster after their Euro 2008 flop.

Uruguay and Mexico, who top the group with four points each, will both qualify if they draw next week, eliminating in the process France and South Africa, both on one point.

France were outplayed for the first 45 minutes during which they did not create a single chance. Mexico, by contrast, came close to scoring on several occasions, first when forward Carlos Vela raced into the box unchallenged early on but missed the target.

The France fans shivered again on 19 minutes when full back Carlos Salcido fired just wide from the edge of the box. The same player threatened again eighth minutes later, shooting straight at Lloris from close range.

France were hardly better in the second half, although they did have a chance on 54 minutes when a shot from just outside the area by winger Florent Malouda flew narrowly over the bar.

That was far from enough, however, and coach Raymond Domenech's men, who have frustrated their fans with uninspiring performances for years, can expect a stiff challenge against South Africa next Tuesday in Bloemfontein.

With their fate out of their hands, they will have to face that match without holding midfielder Jeremy Toulalan, who will be suspended after picking his second yellow card of the tournament.

© Copyright 2022 Reuters Limited. All rights reserved. Republication or redistribution of Reuters content, including by framing or similar means, is expressly prohibited without the prior written consent of Reuters. Reuters shall not be liable for any errors or delays in the content, or for any actions taken in reliance thereon.
Related News: France, South Africa, Mexico, Hugo Lloris, Jeremy Toulalan
COMMENT
Print this article