Messi showed he can carry the team at this World Cup 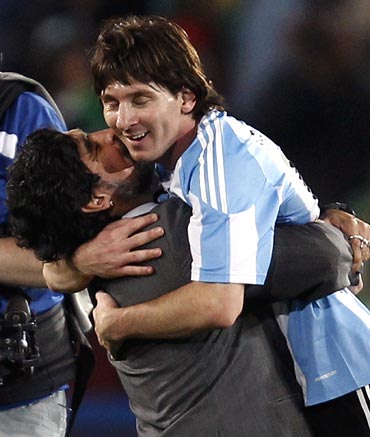 Lionel Messi answered the key question for Argentina with a display full of artistry and guile in Saturday's 1-0 win over Nigeria, showing even without scoring himself he can carry the team at this World Cup.

While his coach Diego Maradona did his utmost to grab the spotlight on the touchline, Messi's quicksilver brilliance made it impossible to divert eyes from the Group B game for long.

A Messi goal, to add to the decisive sixth minute header from Gabriel Heinze, would have settled the nerves of a nation and of his increasingly agitated coach but it was not necessary for him to prove a point and set this World Cup alight yet. 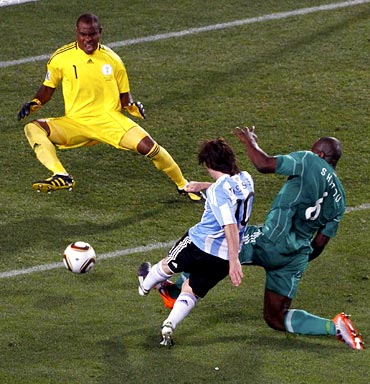 The contrast between the Messi of the 2006 World Cup, when he was confined to a bit-part role by then coach Jose Pekerman, could hardly have been greater.

Then, Messi was forced to watch from the bench when Argentina made a limp exit against hosts Germany, who could hardly believe their luck at not having to face him.

Four years on, now World Player of the Year, he set about delighting the fans at Ellis Park with his insatiable appetite for the ball.

Within a matter of seconds he was dancing through the middle of the Nigeria defence to create a first half-chance.

It seemed only moments later when he skipped down the left and teed up Gonzalo Higuain to miss from a few metres out.

Only the alert goalkeeping of Vincent Enyeama denied him a goal that seemed inevitable in the first half, as twice the Nigerian leapt high to his right to get a fingertip to one of those deft strikes from the forward's left foot.

Messi is capable of leading the team like Maradona in 1986 As Nigeria left more gaps in the second half, Messi saw even more of the ball.

Twice his darting pace and strength took him past challenges on to free balls in the box but his first shot was a fraction wide and a second time he was denied point-blank by the keeper.

For Maradona, it was a successful first World Cup outing for the three-man strike force of Messi, Carlos Tevez and Higuain.

He will be frustrated at the lack of more goals, and there was lots to worry about on the right of defence after Chinedu Obasi and the rest of Nigeria's attack made life uncomfortable for the pony-tailed duo Martin Demichelis and Jonas Gutierrez.

But there were clear signs Messi is capable of leading the team in the way Maradona did in 1986, not just with a similar level of skill but with some of his force of personality too.

When he starts scoring, Argentina will be truly dangerous.