While Rafa Benitez celebrated a 4-0 victory over a woeful Werder Bremen and his first home win in Europe as Inter coach, Pep Guardiola's Barcelona laboured against their bogey side Rubin Kazan.

Eto'o scored two in a six-minute burst in the first half, helped set up Wesley Sneijder, another La Liga reject, for Inter's third and completed his hat-trick nine minutes from time.

The Spanish champions had to come from behind to salvage a point against the same unglamorous opponents who stunned the then European champions 2-1 at the Nou Camp last season before a 0-0 home draw. 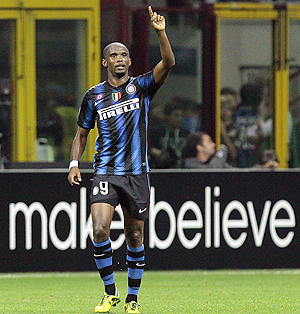 World Player of the Year Messi, who scored twice in Barcelona's opening group D match, came off the bench for the last half-hour but was unable to make the difference with Rubin keeper Sergei Ryzhikov denying the Argentine wizard late on.

Both goals came from the penalty spot, with captain Christian Noboa putting the home side ahead in the 30th minute and David Villa equalising on the hour.

Villa's former club Valencia, currently top of La Liga, failed to convert home advantage and plenty of early possession into goals and paid the price with a 1-0 defeat by Manchester United in Group C.

With Wayne Rooney sidelined by injury, United's new Mexican signing Javier Hernandez came off the bench to break the deadlock with a clinical finish five minutes before the end of an uninspiring match.

There were penalties galore at Tottenham Hotspur, Inter's rivals in Group A, as the English side celebrated their first home game in the Champions League proper with a 4-1 spanking of Dutch side Twente Enschede.

Dutchman Rafael van de Vaart, another refugee from La Liga, proved the tormentor for his compatriots in a hero-turned-villain performance that saw him score the opener, miss a penalty and then get sent off with 29 minutes remaining.

Roman Pavlyuchenko made no mistake with two spot kicks either side of a goal from Twente's Nacer Chadli.

Gareth Bale wrapped up the scoring five minutes from time with Spurs now level on four points with Inter, their next opponents.

In Group B, Schalke 04 netted two late goals in Gelsenkirchen to beat Benfica 2-0.

© Copyright 2021 Reuters Limited. All rights reserved. Republication or redistribution of Reuters content, including by framing or similar means, is expressly prohibited without the prior written consent of Reuters. Reuters shall not be liable for any errors or delays in the content, or for any actions taken in reliance thereon.
Related News: La Liga, Inter Milan, Barcelona, Manchester United in Group, Dutchman Rafael van de Vaart
SHARE THIS STORYCOMMENT
Print this article