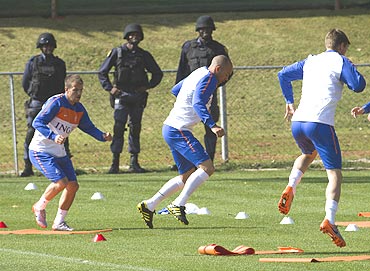 Netherlands coach Bert van Marwijk's side face two dangers when they start their World Cup Group E campaign at Ellis Park on Monday - opponents Denmark and the possibility of being too confident.

The Dutch, who sealed a place in the finals after winning all their qualifying matches, carried that form into their World Cup warm-up games and are among the favourites to finish as world champions in a month's time.

Van Marwijk said at the Dutch training base at Wits University in Johannesburg: "Yes, we did excellently in our warm-up matches, but we are taking nothing for granted against any opponents in the World Cup.

"We believe we can do well, and now we must go and do it."

Expectations remains high at home that his team can go one better than the sides of 1974 and 1978 who lost in successive World Cup finals, and there is a sense within the Dutch squad that they do not just want to win but do it in style.

I want to give more to the game: Van Persie 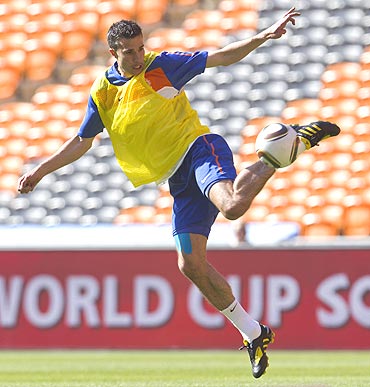 Image: Robin van Persie of the Netherlands kicks the ball during a training session

Striker Robin van Persie, who has netted four goals in three warm-up games, said he wanted to do more than just score goals in South Africa.

The Dutch, who have not lost to Denmark for 43 years, will be without injured winger Arjen Robben (hamstring).

The match will be significant for captain Giovanni van Bronckhorst who will become the fourth Dutchman to win 100 caps after Edwin van der Sar, Frank de Boer and Philip Cocu.

Netherlands' strength lies in their attack, with the 'Big Four' - as the Dutch media call them - of Van Persie, Wesley Sneijder, Rafael van der Vaart and Robben, when he returns from injury, the key to their success.

'We have nothing to lose' 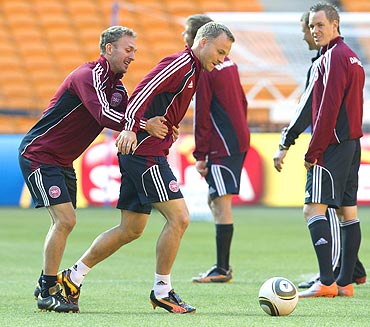 However, Denmark winger Dennis Rommedahl believes the towering Dutch expectations could give his side an advantage.

"The players are being realistic but people in Holland and the media think that they only have to turn up and pick up the trophy," he said.

"Everyone expects them to beat us quite easily and so we have nothing to lose on Monday, which can result in a surprise."

With Robben likely to be replaced by the industrious Dirk Kuyt, for the opener at least, the Danish defence is going to be severely tested but their coach Morten Olsen has faith in his side to deal with the threat.

"It's all about how you play on the day," he said. "That's the name of the game at the World Cup. You are only playing for four weeks and you have to maintain your form every day." 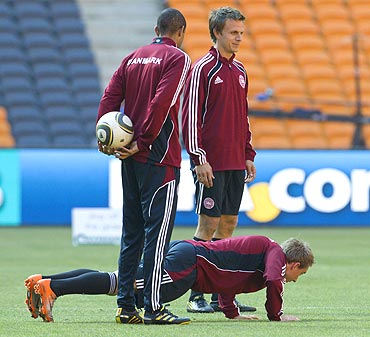 Olsen, who celebrates 10 years as national team coach at the finals, has one main injury worry in striker Nicklas Bendtner.

The 22-year-old, who has been bothered by a nagging groin problem, has not played since May. He showed signs of returning to match fitness this week when he began training again with the squad but has little chance of playing against Netherlands.

Bendtner's place is likely to be taken by Jon Dahl Tomasson or Soren Larsen while first choice goalkeeper Thomas Sorensen should be fully fit after recovering from a dislocated elbow.