India turned in a superb show as they rallied from two goals down to beat England 5-4 in the penalty shoot-out and book a berth in final of the men's hockey tournament at the Commonwealth Games on Tuesday.

India will meet World champions Australia, who thrashed New Zealand 6-2 in the other semi-final earlier in the day.

The home side displayed great character and determination before a packed Major Dhyan Chand National Stadium to not only stage a remarkable fightback but also convert all their strokes in the shoot-out.

In the shoot-out, the onus was on Sarvanjit Singh, Vikram Pillay, Sandeep Singh, Arjun Halappa and Shivendra Singh to deliver the goods, and they did not disappoint. 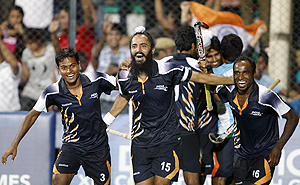 India's custodian Bharat Chetri also played his role to perfection in the shoot-out, denying Glenn Kirkham with a brilliant diving save to his right.

Even though Richard Smith, Richard Mantell, Ashley Jackson and Simon Mantell converted their strokes, Chetri's brilliant save made the difference ultimately.

Tuesday's victory was sweet revenge over the Englishmen, who beat India 2-3 in the World Cup earlier this year at the same venue.

As the scoreline suggests, the match was a high-intensity affair from the onset with adrenaline flowing on both sides throughout.

The Indians trailled 1-3 with barely 15 minutes to go for the hooter but never gave up. In fact, they showed great fighting spirit to pump in two goals in three minutes and take the game to extra-time.

The opening half was a battle of midfield possession as both the sides tried hard to control the proceedings.

India controlled the pace of the match initially as their midfield continued from where they left against Pakistan and combined well to ease the pressure on the backline.

The first real scoring chance of the match went to India in the 26th minute, when Sarvanjit set it up for Shivendra, who, after failing initially with a reverse, pushed the ball wide off the English goal with only custodian James Fair to beat.

India continued to mount pressure on the English defence and in the process earned their first penalty-corner after Shivendra found Richard Mantell's foot inside the circle.

The Indians went for variation but Dhananjay Mahadik's low flick was saved by Fair, only to see an alert Sarvanjit pushing the ball home from a goalmouth scramble in the 19th minute.

Three minutes later an unmarked England got a golden opportunity to equalise when Rob Moore found Richard Mantell unmarked inside the circle but the English defender shot wide from what was an easy chance.

Thereafter, attacks came in quick succession from the two teams but both were unable to finish.

But 10 seconds from the break England earned their first penalty-corner when they found Danish Mujataba's foot inside the circle and from the resultant set-piece Jackson scored to go into the breather 1-1.

However, after the change of ends it was a completely a different scenario as England pumped in two quick goals from penalty-corners, much to the disappointment of the packed house.

England earned their second penalty-corner just five minutes after the breather and once again Jackson was bang on target with his drag flick.

If that was not enough, England made it 3-1 four minutes later when Praboth Tirkey conceded an unnecessary penalty-corner after he pushed English captain Barry Middleton inside the circle.

This time, England went for variation and Simon Mantell made no mistake in putting the ball to the back of the Indian net.

India, however, did not give up. Egged on by a vociferous home crowd they pressed hard for goals and managed two within a span of three minutes.

Vikram reduced the margin in the 57th minute with a deft touch after Sardara Singh and Sandeep combined to set him up.

Then Sarvanjit scored his second, the all-important equalizer, again from a goalmouth melee to send the spectators into wild celebrations.

In the dying moments of regulation time, it was all India as they mounted attack after attack on the English goal, but just could not score.

In the shoot-out, the Indians displayed great composure.

Smith and Richard Mantell took the first two shots for England and on both the occasion beat Bharat all ends up.

However, the Indian custodian denied Kirkham off the third attempt from the spot with a superb diving save to his right.

From there on, Sandeep, Arjun and Shivendra made no mistake, converting their shots, to give Indian victory.