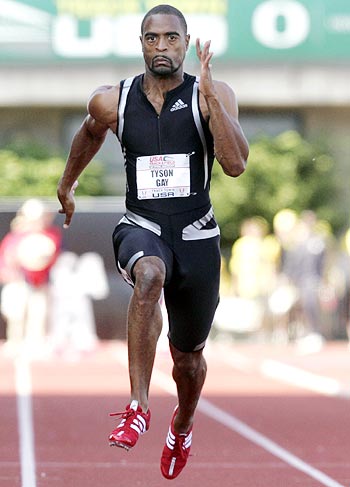 "It looks very unlikely he will compete," Mark Wetmore said in a telephone interview from New York. "There's a readiness (needed) to run the 100 metres, and he does not have that."

Wetmore, who is both Gay's agent and the New York meeting organiser, added his client was not injured, just not in a state of "preparedness" and had also been advised by world renowned Munich sports doctor Hans-Wilhelm Mueller-Wohlfahrt not to run.

"Certainly in Manchester it looked good," Wetmore said. "But I think it is just a situation where it could be risky for him to run (this weekend). That's the last thing we want."

Groin surgery in November slowed Gay's early preparations and he needed time to cover from the Manchester race, Wetmore said.

"He has been in full training since then. ... he's just unfortunately not going to be ready," Wetmore said.

Gay's Diamond League schedule should otherwise remain the same, beginning with a 200 metres in Eugene, Oregon on July 3, Wetmore said.

© Copyright 2021 Reuters Limited. All rights reserved. Republication or redistribution of Reuters content, including by framing or similar means, is expressly prohibited without the prior written consent of Reuters. Reuters shall not be liable for any errors or delays in the content, or for any actions taken in reliance thereon.
Related News: New York Diamond League, Mark Wetmore, Manchester, Hans-Wilhelm Mueller-Wohlfahrt, Bolt
COMMENT
Print this article

Bolt to run first 100m of season in South Korea