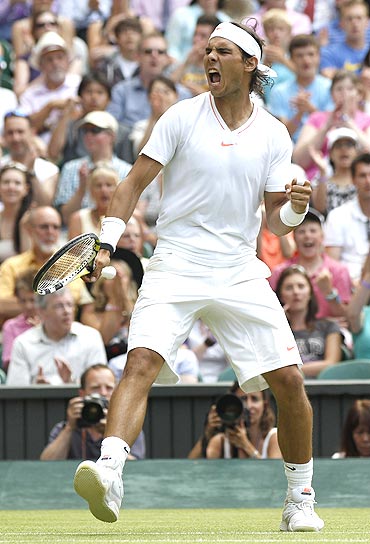 The world number one became the first Spanish man to win two titles at the All England Club and took his overall tally of grand slam crowns to eight.

Spaniard Nadal, who won in 2008 but was unable to defend his title last year because of a knee problem, fell to the ground with his hands on his face after belting a forehand past the tall Czech on his first match point.

Berdych had disposed of six-times champion Roger Federer and third seed Novak Djokovic on the way to the final, but proved no match for Nadal.

The 24-year-old Czech started brightly on a packed sunny Centre Court but lost his momentum midway through the first set, and after squandering three break points at the start of the second never really looked like challenging Nadal.

The Spaniard has reached his fourth final -- the first showpiece match since 2002 which did not feature Roger Federer.

Yet in January things looked a lot less rosy for the Mallorcan, who is on the brink of an eighth grand slam title and a cavernous lead in the world rankings after he could not defend his Wimbledon title in 2009.

A knee injury prevented him returning to the All England Club as champion, and in January he limped out of his Australian Open quarter-final against Andy Murray as tendinitis again took its toll.

He had suffered a bleak 11 months in which he did not win a tour title and relinquished the world number one spot to Federer along with his French and Wimbledon crowns.

But an all-conquering 2010 claycourt campaign in Europe and a typically gritty run through the draw here have finally dispelled any lingering doubts about Nadal's fitness and his rightful place at the top of the game.

© Copyright 2022 Reuters Limited. All rights reserved. Republication or redistribution of Reuters content, including by framing or similar means, is expressly prohibited without the prior written consent of Reuters. Reuters shall not be liable for any errors or delays in the content, or for any actions taken in reliance thereon.
Related News: Rafael Nadal, Tomas Berdych, Roger Federer, All England Club, Novak Djokovic
COMMENT
Print this article