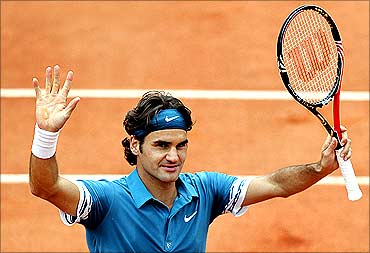 As Roger Federer celebrates yet another career milestone by securing his 700th singles match win, Senior Associate Editor Bikash Mohapatra looks at the elite club of which the Swiss has become the latest member.

Is Roger Federer the best player ever?

This is an argument that will continue for some time to come.

The Swiss, to his credit, has done all he could have to stake his claim.

There were a few who argued it would be difficult to accept Federer as the best ever till he won every major.

"If anything, I feel a little less pressure, because I've proven it to myself - and maybe to many other people," Federer said after the draw ceremony this year.

The Swiss now has won 16 major singles titles, more than any other male player and the win at Paris last year made him one of the only six players to complete a career Grand Slam.

Federer has also appeared in an unprecedented 22 major finals, and has reached the semi-finals or better of the last 23 major tournaments.

However, also true is the fact that after his win at the Australian Open earlier this year, the Swiss player's form has been indifferent.

Add to this the fact that Nadal is in imperious form and will go to any length to reclaim the title that he held for four years in succession.

Even Federer admits, he isn't the favourite to defend his title.

"I'd love to say that I am the favourite but I don't think that's right," said the Swiss when asked about his chances, adding, "The guy's (Nadal) been on an absolute tear on clay for pretty much five years, he's lost just one match at the French Open and I think he's still the favourite."

However, notwithstanding the fact that the Spaniard remains the favourite in Paris, there are enough records that can make the tournament memorable for Federer.

And the Swiss reached one of them on Friday, with a comfortable 6-4, 6-0, 6-4 win over German Julian Reister.

It was Federer's 700th career singles wins on the ATP Tour, making him only the 10th player ever, and only active pro, to have won 700 or more singles matches.

Two more wins and Federer won't just book a 24th successive semi-final berth but also become only the fifth player ever to have won 200 (or more) singles matches at majors.

*  Federer has the best singles record among the active players

Connors: Best of the lot 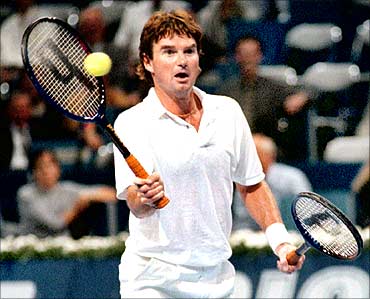 His name is synonymous with tennis.

And his credentials say it all.

It doesn't, therefore, come across as a surprise that Connors has won more matches than any other professional on the men's tour - in the open era.

The only tournament Connors never won the French Open.

However, his victory at the 1976 US Open came when that tournament was held on clay courts of Forest Hills.

And that makes the American legend one of only five men --  besides Mats Wilander, Andre Agassi, Roger Federer and Rafael Nadal - to have won a major title on all the three surfaces.

The Big W apart, he won all 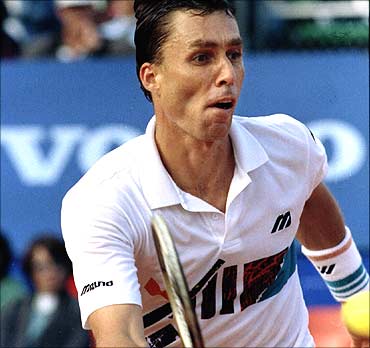 The moment you start looking beyond the "Grass is for cows" statement, you realize there is much more to Ivan Lendl's career than those words for which he is most remembered.

He captured a whopping 40 ATP titles and attained the No. 1 ranking on February 28, 1983, all this before his 23rd birthday.

But major titles eluded him in the early years of his pro career.

Lendl reached his first major final at the French Open in 1981, where he lost in five sets to the legendary Swede, Bjorn Borg.

That was followed by runner-up finishes at the 1982 US Open, the 1983 Australian Open and US Open.

But when Lendl's first Grand Slam title eventually came, at the 1984 French Open, it came in style.

The Czech-born American beat John McEnroe in five sets he was one of the only three players to have defeated the legendary American that year to finally capture something that had eluded him thus far.

He added seven more major titles to his kitty.

However, there was one trophy that remained elusive throughout his career the Wimbledon crown.

His famous quote above was probably a manifestation of his frustration. 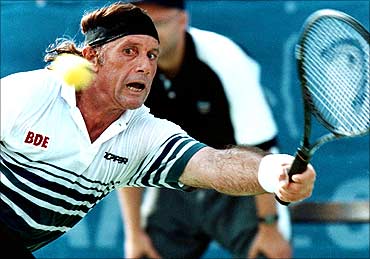 But a look at his credentials will ensure he deserves every mention that gets.

Vilas won four major titles -- the French Open and the US Open in 1977, both on his preferred clay surface) and the 1978 and 1979 Australian Open, on both occasions on grass.

Considering he is an Argentine many could be forgiven for assuming clay to be Vilas's preferred surface.

However, Vilas got his first major breakthrough on a grass court, beating Romanian Ilie Nastase in the 1974 Masters final.

The Argentine's best year on tour was undoubtedly 1977 when he won two of the four majors and 16 of the 31 ATP tournaments he entered.

His singles win-loss record for the year read thus: 130 wins against just 15 losses.

No wonder he was called the Young Bull of Pampas.

Vilas also held the open era record for the longest winning streak on clay at 53 matches -- until it was bettered by Rafael Nadal in 2006.

You got to be serious 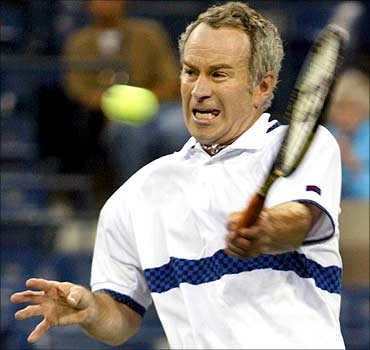 John McEnroe is best remembered for being what he was an entertainer.

His aggressive on-court behaviour, besides frequently landing him in trouble with the authorities, also regaled the audience.

And who can forget that memorable catchphrase "You can not be serious!", directed towards an umpire at Wimbledon (1981), that later became the title of his autobiography.

However, keeping aside his antics if one concentrates just on the American's career, the latter would come across as a major achiever.

At the 1977 Wimbledon, McEnroe, then just 18, made it through the qualifying tournament and into the main draw at Wimbledon, where he lost in the semifinals to Jimmy Connors for what was the best performance by a qualifier at a major tournament.

And in this case, we are definitely serious. 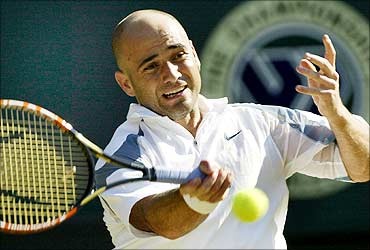 Ask yourself a question: What remains in professional tennis that Andre Agassi hasn't won?

We'll mention some to help to recollect his achievements.

Theever to have achieved a Golden Slam of all the four major titles and an Olympic gold. American remains the only male player

And, alongside Rod Laver, Don Budge, Fred Perry, Roy Emerson, and Roger Federer, is one of the only six men to have achieved a career Grand Slam.

Notwithstanding the controversy and criticisms following his admissions in Open his autobiography, published in November last year Agassi remains a champion.

The key elements of his game a powerful return of serve, a keen sense of anticipation and a strong baseline game still inspire many aspiring players.

As also does his resilience the American in 1998 came back from being ranked No. 141 to reclaim the top spot. 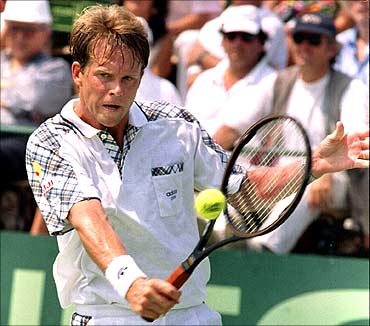 Poetry in motion, elegance in person, an artist at work or for that matter class in abundance.

There can be many phrases used to describe Stefan Edberg's game.

And it wasn't just about artistry. It was also about winning.

The Swede first came into limelight winning all four major junior titles in 1983. He thereby became the first-ever player, and so far the only, to achieve the Junior Grand Slam.

What followed was an equally, if not more, illustrious career as a pro. A career that yielded six major titles two each at the Australian and US Opens and the Wimbledon, 42 ATP titles, a Masters win (in 1989), the No.1 Ranking and a whopping 806 career match wins in singles.

And the facets in the game that ensured the above achievements were a high-kicking serve, amazing reflexes, good court coverage and a remarkable backhand volley.

For trivia lovers, Edberg's distinctive serve is used as the logo for the Australian Open. 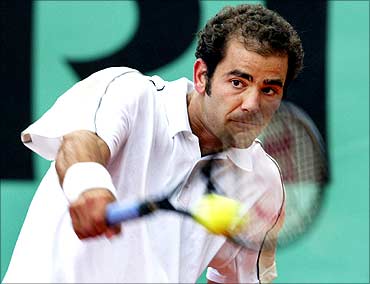 A basic change (to his game) early on in his career set Pete Sampras on the road to greatness.

Sampras switched from a double-handed backhand to a single-handed aiming to be better prepared to win Wimbledon.

He ended up winning 14 major titles during his 15-year pro career.

Besides, there was a slew of other achievements - 64 singles titles, the No. 1 ranking for a record 286 weeks to name a few.

The consistency in his game was amazing.

Having come into the limelight following his unexpected win at the 1990 US Open, Sampras dominated the 90s before calling it quits in 2002.

His final tournament was yet another major triumph again at the US Open (on this occasion it was fifth title at New York). 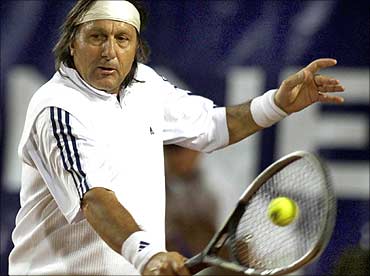 "If you have confidence, you have patience. Confidence, that is everything."

"As long as I can get angry, then I play well. If I play well, I can beat anybody. I am happy because I am getting angry."

"I haven't reported my missing credit card to the police because whoever stole it is spending less than my wife."

We aren't just listing quotes here but also trying to define a man (in his own words) who was quite a character.

For starters, Ilie Nastase was the first ever player to be ranked No.1, assuming the top spot when the rankings were introduced in 1973.

Considered one of the most gifted players in history, Nastase was famous both for his racket skills as well as his ability to entertain spectators with his antics.

And fines, disqualifications, and suspensions marred his otherwise illustrious career.

All, save a title on clay 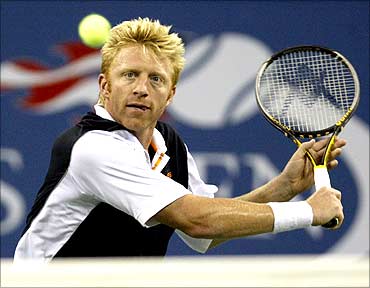 His first brush with fame was as a teenager only 17 to be precise.

As Becker won his first singles title at Queen's Club (1985), little did he know that he was to win something huge just weeks later.

However, a four-set win over Kevin Curren made the German teenager the first unseeded player, and the youngest, to win the Wimbledon singles title.

What followed was a topsy-turvy (read inconsistent) career graph that witnessed many highs: 49 singles titles, 15 doubles titles, six majors and even a brief reign at the top of the rankings.

Also attached were a few lows, the biggest of them being the inability to win a tournament on clay.

Becker did reach a few finals (six to be precise) playing on the red surface but lost in each one of them.

His success on the faster surfaces though more than made up for it.