'I am on par with top discus throwers in the world' 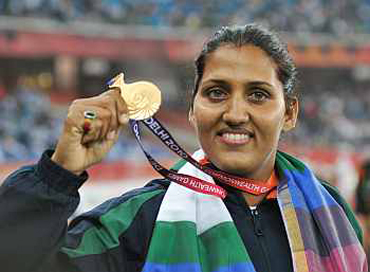 Krishna Poonia, who became the first Indian woman to win an individual Commonwealth Games gold medal early this week, on Sunday said she bagged the yellow metal despite having a knee swelling during her discus throw event.

"It is a swelling and it has been there for quite some time. I will consult the doctors at the SAI centre in Patiala because I have to take their permission before resorting to any treatment. The swelling was there during the competition at the Games but since my first throw was good enough I did not have to exert after that. I kept my energy intact because my gold was already assured," said Poonia who led an Indian clean sweep in the women's discus throw.

Poonia, who was accorded a grand welcome when she arrived in Jaipur, said, to win medal in next month's Asian Games in China and 2012 London Olympics, she needs to work more on her fitness, especially building muscles of her lower body.

"I am hopeful of getting medals at Asian Games in China next month but I have to work more on strengthening my lower body muscles. In USA too I had worked hard and the results are there to see. Technically I feel that I am at par with other top throwers in the world," said Poonia.

'We can hope for an Olympic medal' 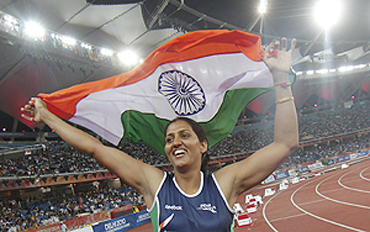 "I have already started my preparations. In fact I went for practice a day after my event at Delhi and even here in Jaipur I want to loosen up with a few throws," said Poonia who is ranked No 2 among Asian athletes in the IAAF rankings, behind Li Yanfeng of China.

Virendra Poonia, her husband and coach, said she has arms a bit longer than most and that gives her an advantage.

"She has very good shoulder strength and the advantage is her arms are bit longer than usual. Her lower body is also bit longer and that needs more strength. Now, she is in a position to compete with the best. A throw of 62.59 was good enough for a bronze medal at Beijing Olympics and Krishna now has a best of 63.69 meters and that augurs well for the London Olympics. We have scheduled practice in the same weather conditions. We can now hope an Olympic medal from her now," said Virendra.