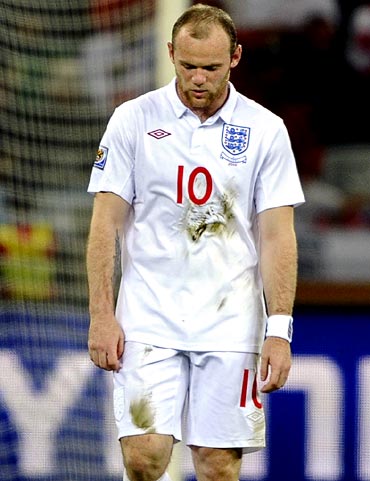 Wayne Rooney was meant to be one of the shining lights at this World Cup but in the end the England striker produced little more than a flicker.

The bulldozing 24-year-old came to South Africa on a wave of accolades after scoring 34 goals in all competitions last season having quickly mastered a new role in Manchester United's team.

When he talked of ambitions to out-perform Portugal's Cristiano Ronaldo, Lionel Messi of Argentina, Fernando Torres of Spain and Brazil's Kaka at the World Cup, few would have bet against him.

Despite a phenomenal season, British media made much of Rooney's lack of goals at international level heading into the tournament, while also hailing him as England's great hope. 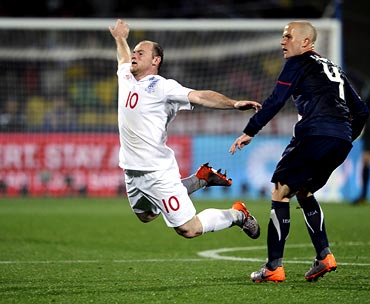 The pressure was perhaps too much.

England, often toothless in attack without a top form Rooney, kicked off their World Cup with a 1-1 draw with the United States -- forever to be remembered for goalkeeper Robert Green's goal-gifting gaffe.

Next followed a dire 0-0 draw with Algeria and then an only marginally improved 1-0 victory over Slovenia to ensure qualification for the last 16 and a tie with rivals Germany.

In all three matches, Rooney was the man on England fans' and commentators' lips. A marauding, energetic and passionate frontman, the United player seemed bereft of his usual traits and his touch was noticeably sporadic in quality.

Rooney has not scored in nine internationals 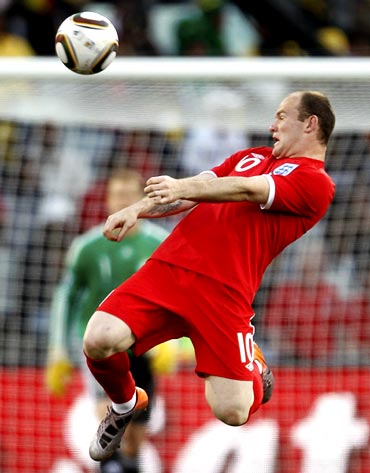 Everybody expected the 'real Rooney' to appear against Germany at the Free State stadium on Sunday, only to witness another frustrated figure cut in the sunshine as England were crushed 4-1 and sent packing back to London.

Rooney's passion is there for all to see, although sometimes it spills out in the wrong manner. He had to apologise for criticising England fans who booed his team off after their turgid display against Algeria.

As England's top marksman, he now has the unenviable record of no goals in nine internationals, although many have said that with 25 goals already in his 64 matches for England, he is on course to break Bobby Charlton's long-standing record of 49 goals. Right now though, that seems a long way off. 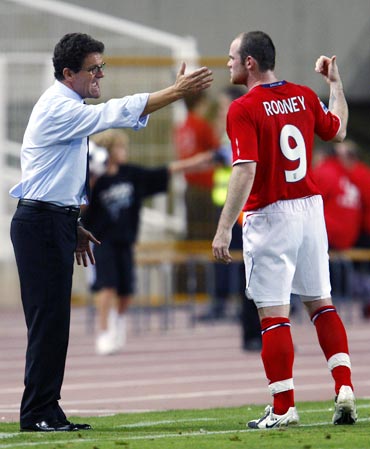 Some critics blame England coach Fabio Capello's tactics for the chalk and cheese of his performances at international and domestic level, suggesting the players do not like their roles which leads to Rooney's impact in matches being nullified.

"When the players play well, they play all the systems. We always play this system in qualification and no one asks this question," Capello told reporters after the Germany defeat.

The Italian has a point. England won nine of their 10 World Cup qualifying matches playing largely the same system, scoring 34 goals and conceding six in the process.

Unfortunately, for Capello and England fans, the players suddenly lacked confidence in South Africa and as the games went on Rooney became less disciplined in his position and instead went searching for a change in his and the team's fortunes.

Rooney is undoubtedly England's best player. The conundrum for Capello is how to make the team use him to the great effect like Alex Ferguson and Manchester United do at club level.