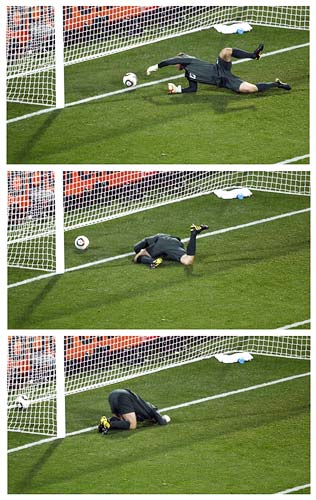 England goalkeeper Robert Green received stinging criticism at home on Sunday following an horrendous mistake which cost his side victory in their opening World Cup game against the United States on Saturday.

Millions of fans watching at home and in pubs across the country held their heads in their hands as West Ham United keeper Green let Clint Dempsey's weak shot slip through his fingers in Rustenburg.

It wiped out Steven Gerrard's early goal and the 1-1 draw now complicates England's progress in the tournament.

"Hand of Clod" was the front page headline in the popular News of the World above the question Should Green be Dropped? The Sunday Mirror ran the same headline, a re-working of the "Hand of God" description of Diego Maradona's controversial goal against England in 1986.

The Mail on Sunday also suggested that Green would be axed by England's Italian coach Fabio Capello.

"Calamity! Robert Green faces England axe after howler hands Americans draw," was its response to the mistake shortly before halftime in the Royal Bafokeng Stadium.

The Sunday Express said Green would be squirming over his error, adding: "There have been few worse examples of the goalkeeping art in this famous competition."

Most front pages carried a photograph of the ball trickling over the line past a horrified Green.

"There are no excuses. There were a couple of bounces en route, but it was just down to poor technique. It was a howler," Wilson said.

Wider debate centred on the demise of England's goalkeepers -- a position that the country could justifiably claim to have the best stoppers in the world.

In recent years there have been high-profile mistakes by David Seaman, Paul Robinson and Scott Carson while David James, who was replaced by Green for the game against the US, is also prone to making errors.

The Sunday Times even managed to link Green's fumble to the catastrophic oil disaster effecting the Gulf Coast in the United States. "One disastrous spill the Yanks won't complain about" was their kicker under the headline Green Fingers.

© Copyright 2020 Reuters Limited. All rights reserved. Republication or redistribution of Reuters content, including by framing or similar means, is expressly prohibited without the prior written consent of Reuters. Reuters shall not be liable for any errors or delays in the content, or for any actions taken in reliance thereon.
Related News: Robert Green, Green Fingers, England, Bob Wilson, United States
SHARE THIS STORYCOMMENT
Print this article