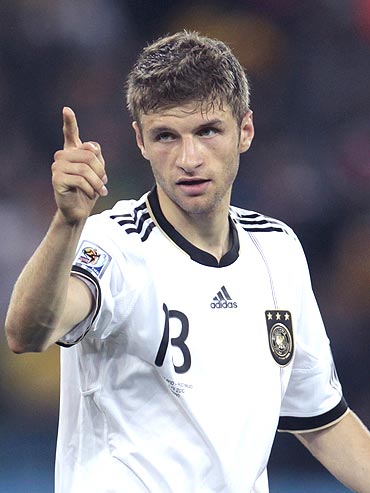 Germany striker Thomas Mueller could crown an "unbelievable" first season in top flight football with the World Cup's young player of the tournament award after he was picked as one of three candidates.

-Who will be the Best Young Player of WC?

"I was just told on the way here and it is a great honour to be selected as one of the nominees," the 20-year-old Bayern Munich striker told reporters on Friday.

"It is a wonderful recognition of your work," he added.

The other two are Ghana's Dede Ayew and Mexico's Giovani Dos Santos. 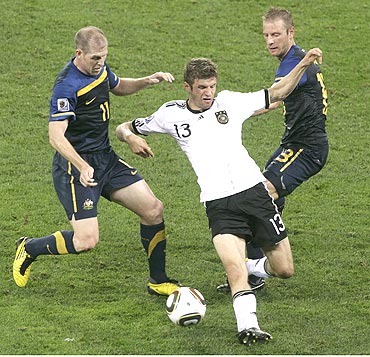 Mueller has scored four goals in his first World Cup, grabbing a starting spot for Germany throughout the tournament after winning his first cap as recently as March.

He could add to this goal tally in Germany's third place playoff against Uruguay on Saturday in Port Elizabeth after missing their 1-0 semi-final defeat to Spain through suspension.

Only 15 months ago Mueller was playing third division football with the Bayern reserves.

But in his first full season with Bayern, Mueller was instrumental in helping them win the domestic league and Cup double as well as play in their losing Champions League final against Inter Milan.

He then immediately joined the Germany squad at their training camp in Italy before flying to South Africa.

'Would have preferred winning the World Cup' 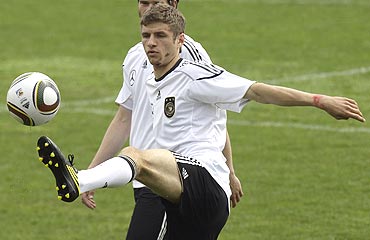 Franz Beckenbauer in 1966 and Lukas Podolski in 2006 are the only other two German players to have won this award, the German soccer federation said.

"It is quite unbelievable because a lot has happened in the past season. But to be honest I would have preferred winning the World Cup than win this award," Mueller said.

The versatile striker missed his biggest game to date when he was suspended from the semi-final and had to watch his teammates lose to Spain from the sidelines.

Mueller said he was now looking forward to some much-deserved rest before the Bundesliga kicks off next month.

"I need this peace and being away from everything after such a long season," he said.