Images: Fans speaks their minds at the World Cup 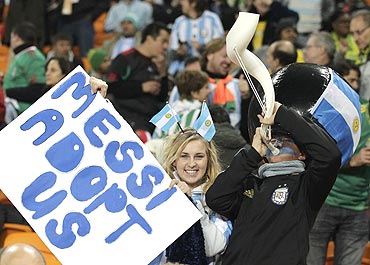 Image: A fan has a special request for Lionel Messi
Photographs: Reuters

Like all big events, the Football World Cup 2010 has captured the attention of the media. But it's the fans who make it a true success.

From all croners of the globe they have travelled to Rainbow Nation to support to their favourite teams and players.

And, it's not just their presence that matters, but what they say. So, be it banners, body art or placards, if it's on the mind it's there for all to see.

A few one-liners that caught our attention.

Argentina's main-man Lionel Messi has mesmerised many a football fan and player with his antics on the field. And his countrymen -- read women --- are enchanted by the pocket-sized dynamite. The placard says it all.

We wonder what Messi will have to say about this unique request! 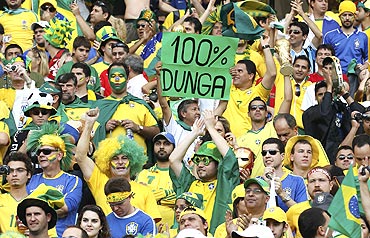 Heading into the World Cup, Brazil's coach Dunga was heavily criticised for his defensive tactics in the tournament qualifiers.

Brazil lost it's flair and the football pundits had written off Dunga and his boys, labelling them the most boring Brazil team to play in the World Cup in a long time.

But the fans never lost hope; they continued to support their team vociforously. They came in their numbers to South Africa.

Here we see a group of fans showing their support to coach Dunga during Brazil's drab draw against Portugal last Friday. 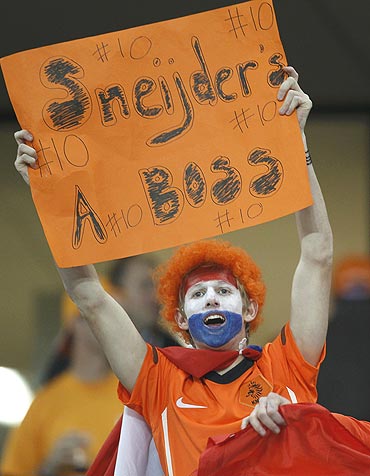 The Dutch team is a talented bunch, but somehow has never shown the characteristics to be serious contenders for the Cup.

But their fans still put their faith in the Oranje brigade. The support is for all to see.

The Netherlands lost a few fans after scraping past Slovakia to enter last eight, but this one definitely knew who is leading the Dutch charge. Image: A Ghana fan celebrates after the team's victory over the United States

The Black Stars overshadowed the bigger teams this World Cup. Ghana have shown that they can't be taken lightly.

They are worthy of their place in the quarter-finals having beaten the United States.

This Ghanaian fan is over the moon after the victory. 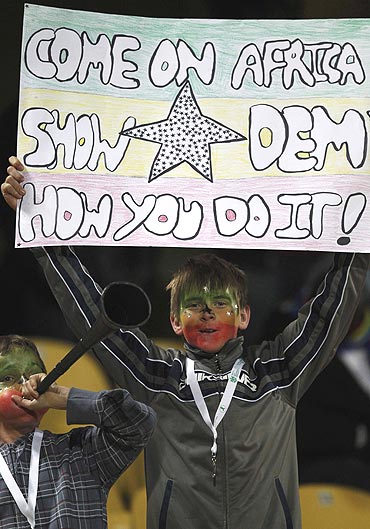 Image: A young fan backs the Ghana team during the match against United States

There were lots of doubts whether South Africa would be able to pull off the first football World Cup in Africa without any glitches. So far, so good!

The football has been great in the first ever World Cup Finals in the African continent. All of this has seemingly gladdened this young fan, who is telling the world to watch how the show is run. 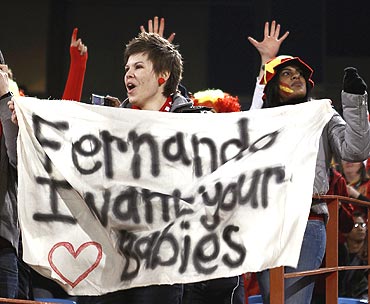 Image: A fan of Spain's Fernando Torres holds up a banner

Spain's Fernando Torres has given himself a new look with haircut and all.

But long hair or short, he continues to find place in the hearts of female fans.

This lady spoke her mind -- loud, legible and clear -- during the match between Spain and Chile. 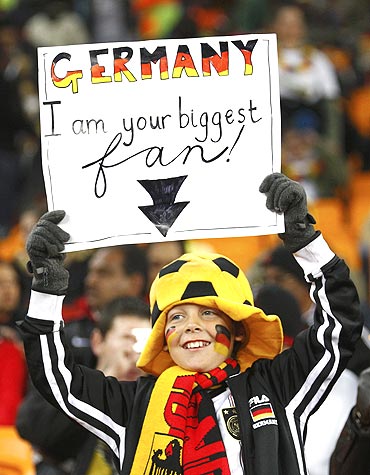 Germany have lived up to their billing as one of the real contenders for the World Cup.

They have missed the services of some of their big names, but haven't let their fans down.

See this one cheer the Germans to victory over Ghana. Most German fans have been unable to travel to South Africa but their support from home has as much of an affect on the team.

Fans cheer for the German team as they watch their boys tame the English Lions.

Aussies are not left behind 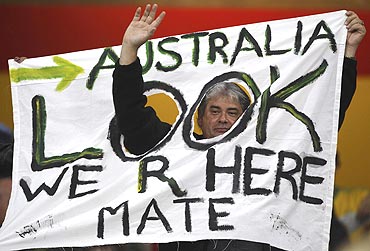 Australian fans also made their presence felt in South Africa.

Here we have an Aussie fan showing his loyalty in perfect Aussie lingo during the match against Serbia. 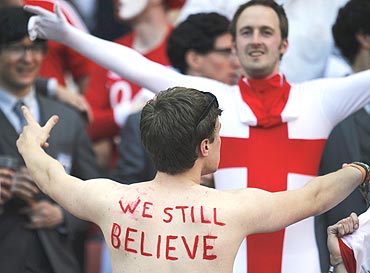 Image: England fans sing before the match against Slovenia

England were the most overhyped team at this World Cup.

They failed miserably, but the fans never gave up hope.

After two horrid performances in the first two matches, the English fans' cheers reached a cresendo and England beat Slovenia 1-0.

Slovenia get some love 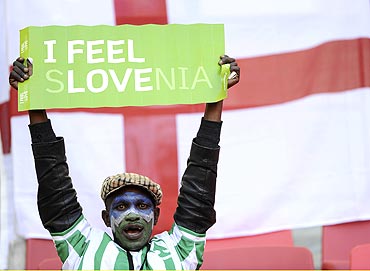 Image: A banner in support of Slovenia

A South African fan professes his love for the Slovenian team during their match against England. 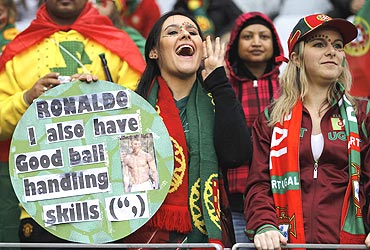 Image: A fan displays a naughty placard directed towards Ronaldo

Women have always been swooning over Cristiano Ronaldo and it was no different at the World Cup.

This female fans displays a naughty message for Ronaldo.

We don't know if he read it, but the woman surely drove home her point. 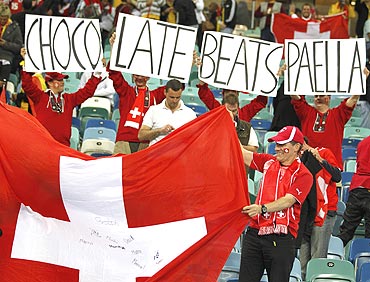 Image: Switzerland's fans hold a national flag and banners as they celebrate after their win against Spain

Swiss fans show the Spanish supporters the bitter truth of a 1-0 loss through food talk. 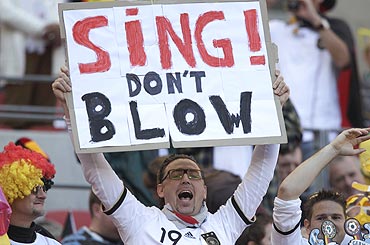 The songs and slogans have been replaced by the noisy vuvuzelas. Fans and players are not taking kindly to it.

Here a fan shows his displeasure towards the vuvuzela. 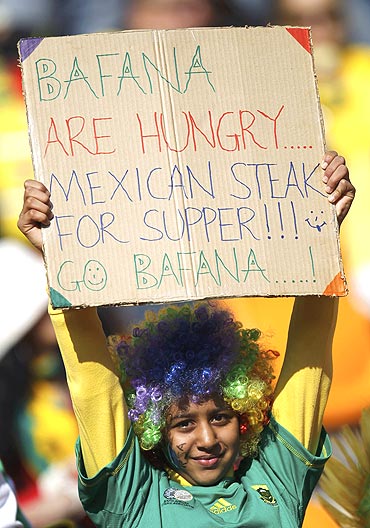 The South Africans stunned the Mexicans by holding them to a 1-1 draw in the opening game of the 2010 World Cup.

This young South African fan was hoping that his Bafana boys would put up a good show against the Mexicans. And their respectable performance was reason enough for this young bloke to hold out his placard. 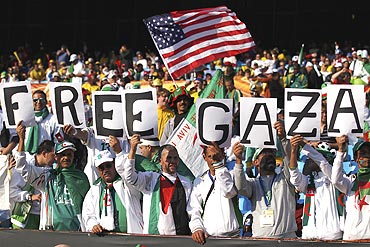 Image: Algeria fans during a match between US and Algeria

One should not mix sports and politics. But sports has always been used as a platform to voice opinions about political and human rights issues.

Some thoughtful Algerian fans take their time out to make known the plight of the Gaza inhabitants because of tbe human rights violations in the Gaza strip.