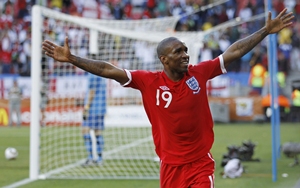 Jermain Defoe rescued England's stuttering World Cup campaign with a first-half strike that was enough to beat Slovenia 1-0 in Group C on Wednesday and book a place in the second round.

The United States also squeezed into the last 16 with a goal in time added on to beat Algeria 1-0 in the other group match.

Defoe started for the first time in the tournament and converted James Milner's perfect cross in the 23rd minute to put England ahead and send their suffering fans into a frenzy.

England were always in control and looked like a completely different team to the side that struggled to successive draws in their opening two games, with Wayne Rooney in battling mood and Defoe proving a menace for the Slovenia defence.

Defoe had started in place of Emile Heskey in attack with Milner in the lineup for the ineffective Aaron Lennon. Matthew Upson started in central defence with Jamie Carragher suspended.

England started nervously but soon found their feet, with Rooney working hard and linking up with Defoe, Milner and Gerrard in a series of attacks on the Slovenian goal.

Rooney, Frank Lampard and John Terry all came close but England's pressure finally paid off when Milner broke free on the right and superbly picked out Defoe for a clinical finish.

Defoe almost scored again three minutes later when his shot from outside the area was palmed away by goalkeeper Samir Handanovic, with Lampard blasting the rebound over the bar.

England could have doubled their lead on the half-hour when Handanovic pulled off a superb double save from Defoe and then Gerrard before leaping on the loose ball as it spun precariously towards the goal line.

England kept up the pressure after the break, with Defoe having an effort disallowed for offside and Terry almost getting on the scoresheet when his close range header was saved.

Rooney, heavily criticised in the first two matches, continued to trouble the Slovenian defence in the second half, riding out the tackles and hitting the post on the turn when Handanovic got the slightest of touches to his effort.

Slovenia had few clear chances but England were worried after 67 minutes when Bostjan Cesar picked up a loose ball and shot narrowly wide. They kept up the pressure until the end but could not find a way through a resilient England defence.

© Copyright 2021 Reuters Limited. All rights reserved. Republication or redistribution of Reuters content, including by framing or similar means, is expressly prohibited without the prior written consent of Reuters. Reuters shall not be liable for any errors or delays in the content, or for any actions taken in reliance thereon.
Related News: Jermain Defoe, Wayne Rooney, England, James Milner, Gerrard
COMMENT
Print this article