England's Chef de mission Craig Hunter said the arrangements at the Delhi Games Village are much better as compared to the Beijing Olympics.

"The Commonwealth Games Village here is better than the Beijing Olympics," Hunter said on Thursday, adding that the Delhi Games would set a high standard for the hosts of London Olympics 2012.

"Every Games Village has progressed and this one sets a new standard. In other Games villages four athletes use one bathroom, whereas here only two would share one bathroom. Even the training facilities are wonderful," added Hunter, who has been staying in the capital for the last four days. 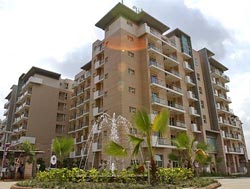 The Chef de Mission is also all praise for some of the Games venues, terming those as world class.

Asked about the security concerns, Hunter said: "We are happy with the arrangements and I can say that the pullouts of the players were not due to security or any other reasons."

"Security has always been an issue since 1972 Munich Olympic disaster. Some of the athletes, who opted out did so due to packed international calendar and injuries. However, we do have some Olympic and World Champions coming for CWG 2010."