Fulham's Zamora out for four months with broken leg

The forward suffered the injury in a challenge with Wolves midfielder Karl Henry after 27 minutes and left the pitch on a stretcher after receiving oxygen. 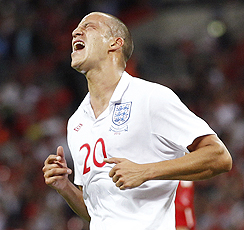 "He has broken his leg just above the ankle," Hughes told the BBC.

"He will have an operation tomorrow. He's out for a minimum of four months but if it's worse it could be longer. It's a big loss."

The injury is a huge personal blow to Zamora who missed out on a possible place in England's World Cup finals squad after needing surgery on an Achilles injury that dogged him in the last few weeks of last season.

Fulham, who had drawn their first three games of the season, looked set for a fourth until new signing Mousa Dembele grabbed his second goal of the game in the last minute after Jelle van Damme had given Wolves an early lead.

© Copyright 2021 Reuters Limited. All rights reserved. Republication or redistribution of Reuters content, including by framing or similar means, is expressly prohibited without the prior written consent of Reuters. Reuters shall not be liable for any errors or delays in the content, or for any actions taken in reliance thereon.
Related News: Fulham, Mark Hughes, BBC, Jelle van Damme, Karl Henry
COMMENT
Print this article

BBC to shut down Asian Network