Australia proved too good for India in the men's hockey tournament at the Commonwealth Games on Thursday. The World champions thrashed the hosts 5-2 in a Pool A match and took a step closer to the semi-finals.

The match was a golden opportunity for India to avenge their World Cup defeat, where they lost by identical margin earlier this year at the same venue, but again the home team was a disappointed. 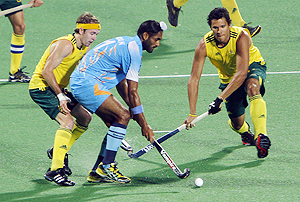 Despite conceding two early goals, India displayed some spark in the opening half but the Australians showed why they are the world's best as they completely outplayed the Rajpal Singh-led side in the second period.

Even though the Indians were impressive in midfield in the opening half, their defence wore a sorry look throughout the match, which eventually turned out to be the difference between the two sides. Dhanjay Mahadik was the weak link at the back while Tushar Khandkar was unimpressive upfront. Custodian Bharat Chetri too had a bad day in office.

The Indians were also undone by poor penalty-corner conversion as they found the net only once out of the six chances they earned in the match.

Contrary to scoreline, India dominated the first half, barring the first 10 minutes, but poor finishing let them down.

As expected, the encounter started at a brisk pace with Australia coming out on top in the initial exchanges, while India took time to find their footing.

The backline continued to haunt the Indians in yet another tournament as Australia took a 2-0 lead within the first six minutes, courtesy some sloppy work by the defenders.

The Kookaburras opened the scoring as early as the third minute when Abbot pounced on Mahadik's defensive error to score with a fierce reverse hit and only Chetri to beat.

If that blow was not enough for the cheering capacity crowd at the Major Dhyan Chand National Stadium, an unmarked Mitton doubled Australia's lead three minutes later, again courtesy a defensive lapse.

But that was all Australia could manage in the half, as after that India went all out attacking in search of goals and displayed beautiful hockey in the process.

Their consistent efforts bore fruit in the 12th minute when a brilliant Dharamvir Singh pulled one back.

The young striker scored from an acute angle with a reverse hit after he was fed by Khandekar with an accurate pass from midfield.

Trailing 1-2, India pressed hard for the equaliser and in their pursuit earned five penalty-corners but failed to covert even a single one.

Credit must also go to Australia's custodian Nathan Burgers, who on three occasions saved the day for his side.

However, after the change of ends it was all Australia as they denied the Indian midfielders any space and enjoyed majority of ball possession.

They kept the Indian defence on their toes with quick attacks as play was mostly confined to the Indian circle.

The Kookaburras pumped in three goals within 25 minutes of the second half through Ockenden, De Young and Turner to thwart any chances of an Indian comeback.

Star drag-flicker Sandeep Singh, however, managed to reduce the margin from a penalty-corner to give Indian fans something to cheer about.

India had earlier scratched past a spirited Malaysia 3-2 in their tournament opener while Australia thrashed Scotland 9-0.

The home team will face Scotland in their next pool match on Saturday while the mighty Aussies are up against Pakistan.