Eyeing to clinch its maiden medal in the Commonwealth Games, the Indian men's hockey team will start as favourites against a tricky Malaysia in their opening pool A encounter at the Major Dhyan Chand National Stadium in New Delhi.

Indian men have never won a medal in CWG since hockey was introduced in 1998 at Kuala Lumpur, where, incidentally, they registered their best performance -- a fourth-place finish.

After Malaysia, the Indian men's team did not take part in the 2002 edition in Manchester and ended a disappointing sixth, behind Malaysia and New Zealand, in Melbourne four years ago.

But this time around, the eight-time Olympic champions seem determined to break their medal jinx in front of the home crowd.

However, for this to happen the Rajpal Singh-led side will have get over their World Cup disappointment. Playing at home, Indian fared poorly in the premier competition held at the same venue earlier this year and finished a lowly eighth out of 12 teams.

Going by their current form, fetching a medal would not be easy for the Indians as they are clubbed in a very competitive pool along with world champions Australia and arch-rivals Pakistan. 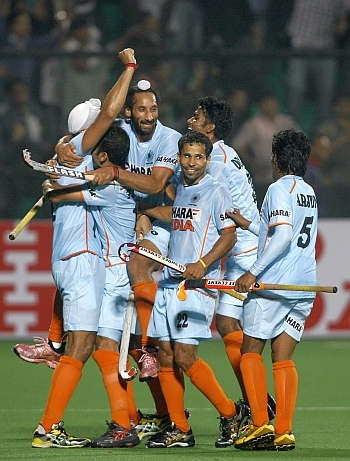 Tuesday's match is crucial to their campaign as a winning start would set the tone for their remaining matches in the pool.

Going by the composition and past records of both the sides, India seem to hold the edge against their South East Asian rivals.

But India's national coach Harendra Singh said they cannot afford to take Malaysia lightly and will be looking for nothing more than a victory.

"Malaysia is a tricky side and have the potential to come out with a few surprises. So, we have to play at our best. Moreover, a win against Malaysia is very important for us ahead as we have tough matches later on," Harendra said.

During the World Cup, the team was guilty of making soft errors -- at crucial moments, which eventually played a vital role in their shoddy performance.

But soon after the tournament, the Indians went back to the drawing board and have rigorously trained at the Balewadi Sports Complex in Pune for the last six months under the watchful eyes of chief coach Jose Brasa and Harendra.

"Our Commonwealth Games preparation are much different from the World Cup. We have worked on specific errors which came to light during the World Cup, like conceding soft goals," Harendra said.

"We are confident that this time we will win a medal in the Commonwealth Games which has been eluding us for so many years," he added.

The Indians could also take heart from the fact that they ended their Games warm-up campaign on an unbeaten note and defeated a formidable-looking England side twice.

But what is most heartening for the Indians is the form of star drag-flicker Sandeep Singh, who was bang on target with set pieces in the practice games.

Sandeep himself would be determined to silence his critics, who have been vociferous following his disappointing show in the World Cup.

With the Asian Games round the corner, a positive result in the Delhi Games would not only do wonders for Indian hockey's sagging fortunes but would also act a morale booster for the team ahead of next month's Guangzhou event.

Off-field controversies, including disputes on salary and captaincy, had dogged the build-up to the World Cup but Harendra said with no such distractions this time, the team is focused to break the medal jinx.

"The boys are in a good mood. They have realised that at the end of the day what counts is performance on the ground," the national coach said.

Interestingly, the Delhi Games is also an opportunity for under-achieving chief coach Jose Brasa to prove his abilities before his contract expires after the Asian Games.

Going by indications a new term is highly unlikely for the Spaniard because of his frequent outbursts in the media against the system.