Manchester United's faltering away form continued to blight their title challenge when they were held to a 0-0 draw at Sunderland in the Premier League on Saturday.

The match started 20 minutes later than scheduled after a burst pipe damaged the visitors' dressing room but there was nothing so destructive about the United attack, as a well-disciplined home defence held them to a fourth successive away draw in the league this season.

Chelsea, who play Arsenal on Sunday, stay top with 15 points, followed by United on 13 and Arsenal on 11. United have now dropped eight points away from home in their opening four matches on their travels.

Rafael van der Vaart's rip-roaring week continued on Saturday when he scored both goals as Tottenham Hotspur came from behind to beat Aston Villa 2-1. 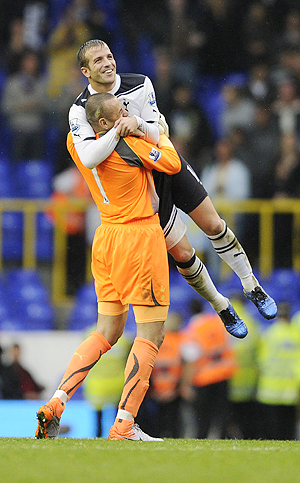 Aston Villa took the lead at White Hart Lane when Marc Albrighton tapped in at the far post, but Spurs came back when Van der Vaart headed them level in stoppage time at the end of the first half and the Dutchman put them ahead with a well-taken strike 15 minutes from time.

His performance followed his adventures on Wednesday when he missed a penalty, scored a goal and got sent off in Spurs' Champions League win over Twente Enschede.

Everton, the only one of the 92 League clubs without a win before kick-off, ended that unwanted record when they climbed off the bottom of the table after beating Birmingham City 2-0 at St Andrews.

Roger Johnson put through his own net after 54 minutes and Tim Cahill added the second with a header after 90 minutes as Birmingham lost at home in the league for the first time since September last year.

That victory lifted Everton off the bottom of the table into 17th place -- sending their arch-rivals Liverpool into the relegation zone at least until they play Blackpool on Sunday.

Fulham's Clint Dempsey, who caused England goalkeeper Robert Green huge embarrassment when he scored a soft goal against him for the United States in the World Cup, beat him again after 33 minutes when he scored against West Ham United at Upton Park -- but this time Green had no chance of saving.

Dempsey controlled the ball with his chest before firing home from 12 yards. Frank Piquionne equalised for the Hammers early in the second half and the match ended 1-1.

© Copyright 2021 Reuters Limited. All rights reserved. Republication or redistribution of Reuters content, including by framing or similar means, is expressly prohibited without the prior written consent of Reuters. Reuters shall not be liable for any errors or delays in the content, or for any actions taken in reliance thereon.
Related News: Manchester United, Rafael van der Vaart, Chelsea, United States, Arsenal
COMMENT
Print this article

No guarantee of staying at Chelsea: Drogba

Arsenal told me I had to stay: Fabregas