Fernando Alonso won the season-opening Bahrain Formula One Grand Prix and led a Ferrari one-two in a dream debut with the Italian glamour team on Sunday. 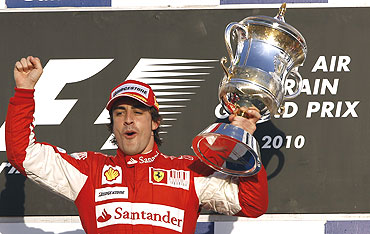 In a strength-sapping race led for 34 of the 49 laps by Germany's Sebastian Vettel before his Red Bull slowed and was reeled in, the Spaniard laid down a marker for the season ahead with his 22nd career victory.

It was the double world champion's first triumph since he won the 2008 Japanese Grand Prix for Renault and he weaved his car from side to side on the track as he approached the chequered flag without another car in sight.

Brazilian Felipe Massa had to settle for second place, 16 seconds behind, on his race return from life-threatening head injuries suffered in Hungary last July.

It was Ferrari's first one-two finish since France in June 2008 and ended a run of three wins in a row by Renault-powered Red Bull.

Britain's Lewis Hamilton, the 2008 world champion, completed the podium for McLaren, 23.1 behind Alonso, with Vettel slipping to fourth after starting on pole.

In a race run without refuelling and in searing temperatures at the newly-extended desert circuit, Alonso collected 25 points for the win under a scoring system that now rewards the top 10 finishers.

After parking up, the Spaniard stood on the car and celebrated - punching the air and beating his chest before hugging mechanics.

Seven-times world champion Michael Schumacher, making a comeback at the age of 41 and after three years away, was sixth for Mercedes and one place behind fellow-German team-mate Nico Rosberg.

In a race low on thrills and spills but picking up excitement as the cars burnt through their heavy fuel loads, world champion Jenson Button made a faltering start to the defence of his title with seventh place on his McLaren debut.

Malaysian-owned Lotus, their exalted name returning to the sport after a 16 year absence, proved to be the best of the three all-new teams and the only ones with a car still running at the finish.

Finland's Heikki Kovalainen was 15th, two laps down, and Italian Jarno Trulli 17th and last of those classified.

© Copyright 2022 Reuters Limited. All rights reserved. Republication or redistribution of Reuters content, including by framing or similar means, is expressly prohibited without the prior written consent of Reuters. Reuters shall not be liable for any errors or delays in the content, or for any actions taken in reliance thereon.
Related News: Fernando Alonso, Ferrari, Red Bull, Sebastian Vettel, McLaren
COMMENT
Print this article