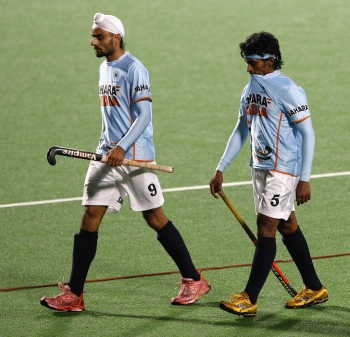 A semi-final spot virtually out of their grasp after back-to-back defeats, India brace up for another tough battle when they take on a European champions England in their next pool B match of the hockey World Cup in New Delhi on Saturday.

India's dream of progressing to the last-four stage of the mega-event in front of home fans received a rude shock when Spain demolished them 2-5 at the Major Dhyan Chand National Stadium.

The euphoria of the 4-1 win over Pakistan has all but settled after Australia and last night Spain gave the home team a reality check.

Even though Jose Brasa has introduced the Indians to the European style of hockey, the games against Australia and Spain has showed that India still have a long way to go when it comes to matching the European teams on the turf.

And England is no different and are probably playing the their best hockey in this tournament, remaining unbeaten so far in their three matches. One of their wins came against hot favourites Australia.

In the last two matches against Australia and Spain, India were outwitted by their opponents in pace and fitness and the hosts can expect a similar challenge from the Englishmen. Brasa has the tough task of sorting out the poor Indian defence.

If the game against Australia was not a lesson, Spain brought out the demons in the backline, which made numerous silly errors to concede soft goals.

On more than one occasion, Sandeep Singh and Dhananjay Mahadik were guilty of giving away the ball to the Spaniards, two of which resulted in goals.

To add to that, man-to-man marking was absent from India's game in the last two matches, leaving rival players unmarked inside the circle. And if they continue to repeat the same mistakes, the Englishmen would capitalise rather easily.

"There were some mistakes we made. We have to improve our defence. We have to look for other weapons to tackle the opponents, as these are the best players we have. We gave away some gift goals to Spain and that happens only in a childish match," Brasa had said.

What was heartening in the game against Spain was that India created plenty of chances to score but the forward-line lacked coordination.

The experienced Deepak Thakur did very little in the first three matches to prove his worth in the side. However, in-form Shivendra Singh's return from a two-match suspension would give Brasa a few options upfront against England.

"The important thing is that we are creating chances. Deepak is not fully fit but we are asking him to play more because of Shiva's (Shivendra) absence. Shiva will return against England and that's a good thing for us. His absence has affected us," the Indian coach said. "We have a good chance to beat England as we defeated the same team during the European tour. We are more or less of the same level," Brasa said.

Another major concern for Brasa ahead of the England match is penalty-corner conversion. Inspite of having three drag-flickers in the side, the Indians only managed to convert one out of the six short corners they earned against Spain.

England, on the other hand, are a confident side with an unbeaten run so far in the tournament and are here to prove a point.

Captain Barry Middleton, Jonty Clarke, Iain Mackay, James Tindall and goalkeeper James Fair seemed in great form in the first three matches and would be aiming to carry on their impressive showing in the tournament.

However, the English side would miss the services of defender Richard Mantell dearly as he has been ruled out of the tournament after twisting his ankle against Pakistan.

Meanwhile in other matches of Pool B, Pakistan, in a similar situation like India with one win out of three games, face a lowly South Africa in a must-win encounter if they desire to keep their hopes alive in the tournament.

However, it is the match between Australia and Spain which both India and Pakistan will be eagerly looking towards as the outcome of that encounter might eventually seal their fate in the 12th edition of the tournament.