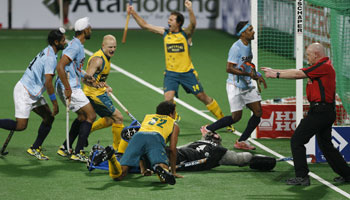 India coach Jose Brasa said the team missed suspended forward Shivendra Singh but had no qualms in admitting that his wards were completely outpaced and outplayed by a vastly superior Australian side in the hockey World Cup at the Dhyan Chand National stadium on Tuesday.

"We did not play badly. But Australia played at a different level of fast-paced hockey. We were not used to that kind of fast hockey," a candid Brasa said after his wards received a 5-2 plastering.

"I concede they played much better then us. They are the best team in the world despite losing against England in their first match. But they were lucky to have scored early goals, one in the first minute," Brasa said.

"We were not lucky with the penalty corners we got. Then we missed Shivendra though we may not have won even if he had played. We could have reduced the margin had he been there. We had difficulty in substituting Shivendra. We had only one forward for the substitution and the players were tired," said the Spaniard.

Drawing a comparison between players from both sides, the coach felt fitness made all the difference.

"Australians are very fit and strong physically. They had started research on this aspect 30 years ago and we started just six months before. They have the equipments like GPRS system for training. In our case we wanted it but we are not getting," he said.

Looking ahead, Brasa was confident that the Indians would bounce back in the next match against Spain on Thursday.

"Spain are a good team. I say this because they don't have two key players in their side  Santi Freixa and Eduard Tabau," the Spaniard said.

"I know the players of Spain. I had trained them for many years. Freixa is not with the current squad due to injury. He is one of the best players in the world. Tubau is injured (in the first match here). Without the two I think we can beat Spain," he said.

"I hope my knowledge of the Spanish team will help the Indian team," he added.

Indian defender Sandeep Singh and forward Deepak Thakur had a forgettable outing but Brasa defended both.

"Sandeep played better than against Pakistan. I'm happy for his performance. For Thakur, he is not 100 per cent fit since his injury a year back. He was not at his best as the pace of the game was very fast and he was not fully fit," Brasa said.

Senior player Prabhjot Singh, however, felt his team-mates left many an opponent unmarked.

"We made some mistakes in man-to-man marking today. We have to improve on that aspect of the game and hopefully bounce back in the next match," Prabhjot said.

Brasa, meanwhile, was critical of the umpire referral system, claiming that his side lost at least one good chance because of it.

"The video umpire turned the referral down but we lost an advantageous position. I think the rule should be that the umpire cannot stop the game in those situation. He could do that only after the ball is out of the game or the ball is in possession of the complaining team," Brasa said.

His Australian counterpart Ric Charlesworth, who had a bitter coaching stint with the Indian team in past, said his players could have played even better.

"We had to play better as we had lost the first match. Thought we need improvement in certain areas, I'm pleased with the performance. But we can play better," he said.

The Australian said India are a good side with talented players but lacked consistency.

"I know India are a very good side and they are very talented. They played really well against Pakistan. But what matters is the consistency to play good hockey," he said.

Asked any changes in the Indian strength after he left the side, he said, "They have improved the organization of the team and how they build attack with interchange of men and passes."