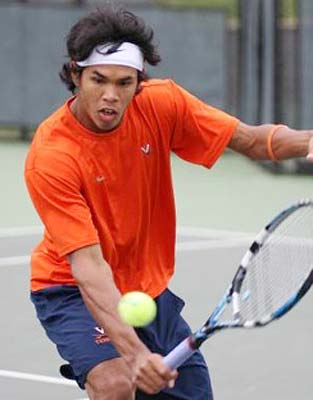 Returning to the elite World Group of Davis Cup after 11 years, an acid test awaits India when they take on formidable Russia in their first round tie in Moscow on Friday.

Even in the absence of world number six Nikolay Davydenko, the hosts would be hard to beat as India have an in-form Mikhail Youzhny to deal with.

World number 13 Youzhny is coming into the tie after finishing runners-up at ATP events in Dubai and Rotterdam and will be a tough nut to crack for India's number one player Somdev Devvarman.

The gritty Somdev has been making waves on the Tour but it's a different ball game altogether when the opponents are the likes of Youzhny.

Igor Andreev, world number 38, has been named as injured Davydenko's replacement and he too is no easy meat.

For India to have any chance in the tie, Somdev will have to play out of his skin to pull off an upset win on day one.

That will give Leander Paes and Mahesh Bhupathi a chance to consolidate the position but again it will boil down to reverse singles and yet again Somdev will be under pressure to pull it off.

Rohan Bopanna has been doing well in doubles on Tour off late but his singles form is not much to talk about against top-notch opponents.

India captain S P Misra knows the job is tough but said India will fight hard. "We will put up a good fight and we have a history of doing well in the Davis Cup tournament," Misra said.

Misra believes Davydenko's absence is good news for India. "Of course, it is a plus point for us. He is world number six and their top player and his absence gives us a good chance now.

"If Somdev can pull off a rubber on day one, we will be in contention. The courts are slow and suit his style of play.

On faster courts he has to play serve and volley but here, he can play his natural game of putting up rallies," he said.

The winner of the tie will qualify for the quarter-finals and the loser will go back to the World Group play-offs.

Statistically, India are leading 2-1 in the head-to-head series but it would be quite a task to maintain that lead.

The Indians, who last appeared in the World Group in 1998, booked their place in the elite 16 with victory over Chinese Taipei and then South Africa in the play-offs last year.

Russia have been champions in 2002 and 2006 and on both occasions, the now-retired Marat Safin played a crucial role in both the singles and doubles rubbers.

In 2009, Russia defeated Romania 4-1 but, playing in Tel Aviv, lost by the same scoreline to Israel in the quarter-finals.

'My profession is my passion': Somdev Devvarman