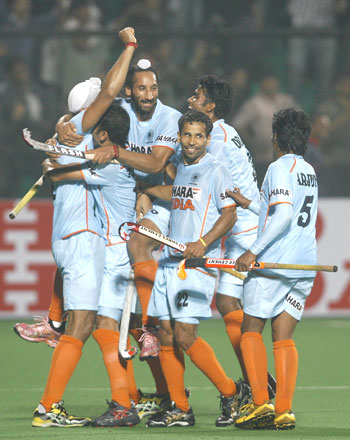 After a virtuoso performance in an emotionally charged campaign-opener against arch-rivals Pakistan, India will have to maintain the attacking form when they take on Australia in their second Pool B match of the hockey World Cup in New Delhi on Tuesday.

India produced one of the finest performances in long time in front of a capacity crowd at the Major Dhyan Chand Stadium to beat Pakistan 4-1 on Sunday and now would want to overcome Australia to brighten their chances for semi-finals.

Pumped up by a cheering home crowd, everything clicked for India against Pakistan with the midfield, defence and upfront spot on.

The defence of Sandeep Singh, Diwakar Ram and Dhananjay Mahdik were able to keep at check the dangerous strike duo of Rehan Butt and Shakeel Abbasi throughout the match.

The upfront led by Prabhjot Singh, Shivendra Singh and Rajpal Singh created havoc with their fast-paced interchanges, but the difference was the midfield with an outstanding Sardar Singh.

On the other hand, Australia would be an altogether different side with their one-touched fast-paced hit and run style of play and India will have to be extra vigilant as the Kookaburras are now like a wounded tiger after their 2-3 loss to England on Tuesday.

Having won 51 of their 72 World Cup matches, Australia boast a winning percentage of 71 - higher than any other team. They finished runners-up in the last two editions (2002 and 2006).

Rightly for India, coach Jose Brasa has advised his boys to remain grounded on their feet and not being carried away by the triumph against Pakistan.

For Ric Charlesworth's side, it will be a must-win match against India and any hiccup tomorrow would make it difficult for Australia to qualify for the semi-finals.

Charlesworth himself has acknowledged that it would be a must-win match for them. "It is a must-win situation now," he said.

The last match between the two teams was in Champions Trophy in Chennai five years ago when Australia won it 4-1.

Australia have come into the tournament at the back of their Champions Trophy triumph at home last year and they have been one of the title contenders though that tag has been dented by their loss to England.

They are the second-ranked side in the world but Olympic and World Cup records (just one gold medal each) do not match with their formidable prowess.

Australia, however, are the favourites as far as history goes with the Indians having won just one of the six matches the two sides have played in World Cup since 1975. The Australians committed mistakes in the defence and also was poor in converting the penalties against England.

Specially, Australia need to improve penalty corner conversion rate as they could score just once from the 12 they got on Tuesday.

In the two other Pool B matches, South Africa take on England while Pakistan play Spain.