The controversy surrounding India football coach Bob Houghton's resignation is finally over with the Briton himself announcing on Wednesday that he has struck a deal with the AIFF to continue till 2013.

"I have signed a contract till 2013," Houghton, who had threatened to resign in May after he learnt that the AIFF was looking for a new coach after the 2011 Asian Cup in Qatar, said at a press conference in Delhi on the eve of national team's departure for a two-month training tour of Portugal.

"My plan is to stay after the Asian Cup. But like any other coach it's never look beyond a big tournament," said the Briton, tongue in cheek, referring to the continental event which will be a tough test for him and his players.

Houghton is not new to controversy, including the latest resignation drama which hit the headlines two months back. On Wednesday he hit out at the clubs for hampering the development of the game in the country.

At first he expressed satisfaction that the clubs allowed the players to prepare exclusively for the Asian Cup. But later he practically laid the blame for national team's poor world ranking on the club bosses.

"There has not been much change in Indian football in the last four years of my coaching career here. The national team's performance depends on the I-League and domestic structure and the clubs do not want to change," he said.

One of the reasons for the sorry state of affairs, Houghton felt, is the composition of the AIFF Executive Committee which has club presidents as its members.

"The Executive Committee has presidents of big clubs as members. So, for example, when I want I-League players not to play in the local leagues, these members don't agree. Ultimately, they take decisions and have voting rights," said the experienced coach.

"I have had several confrontational meetings with the club officials in these four years. I ask them how is that your clubs are more than 100 years old but India are languishing below 130 in FIFA rankings," Houghton, who took over as coach in June 2006, said.

He touched upon his oft-repeated lack of infrastructure in the country and said nothing much will change without addressing this problem.

"I was in Qatar during the Asian Cup draw ceremony and the stadia there were fabulous with all the state-of-the-art facilities. In India we don't have anything. Take the case of Delhi. Ambedkar Stadium is a good venue for the national team but where are the training grounds? During the Nehru Cup last year, the teams had to train at school grounds," he said.

Houghton and 28 national players will leave in the wee hours of Thursday for Portugal for a training tour as part of preparation for the Asian Cup in Qatar in January. 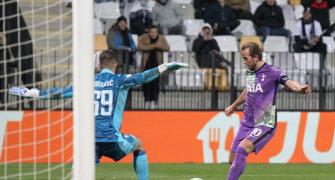