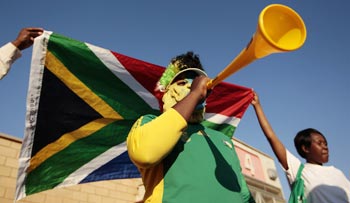 A secret horn called 'Vuvuzela', which is creating an ear-shattering experience during FIFA World Cup in South Africa, could be banned from use inside the stadiums.

Wolrd Cup organising committee chief executive Danny Jordaan said he would continue to monitor their use and that a ban could be enforced if there were "grounds to do so".

FIFA and organisers have urged fans not to blow vuvuzelas during national anthems, and have already said that they will ban the instrument if any are thrown onto the pitch or used as a weapon.

"We did say that if any land on the pitch in anger we will take action. We've tried to get some order. We have asked for no vuvuzelas during national anthems or stadium announcements. It's difficult but we're trying to manage the best we can," Jordaan told the BBC.

"We've had some broadcasters and individuals [complaining] and it's something we are evaluating on an on-going basis," he said.

The BBC and ITV have received complaints from viewers about the background noise, as the noise is not allowing to reflect the real atmosphere of the tournament, The Guardian reports.