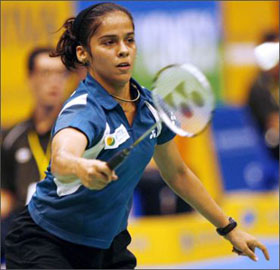 Saina Nehwal continued her rampaging form to win the Indonesia Open Super Series and score a hat-trick of titles on Sunday.

The ace Indian shuttler beat Japan's Sayaka Sato 21-19, 13-21, 21-11 in the final in Jakarta to extend her three-week unbeaten run and add to the Indian Open Grand Prix and Singapore Open titles she collected in the previous weeks.

It is the 20-year-old world No 3's three's third Super Series title overall.

In a see-saw battle that lasted 45 minutes, the 19-year-old Sato matched the defending champion shot for shot for most part of the opening game but was undone by her own mistakes at crucial junctures.

The first game that lasted 14 minutes had both the players tied 11-11 at one stage and though Saina remained ahead for most part after that, a gritty Sato did have her share of chances.

Leading 20-18, Saina could have finished it off on her own serve but she handed Sato a chance by hitting the shuttle wide.

But Sato could not capitalise on the opportunity and smacked a forehand into the net to give Saina the opening game.

The second game saw Sato making a comeback, the change of ends also leading to a change in fortunes. The Japanese proved to be the more dominant of the two players in these 15 minutes as she raced to a 4-9 lead.

Sato sent down some powerful shots from the baseline and Saina could only watch as they fell out of her reach.

The frustration of being out-witted by an opponent ranked 26th in the world showed when Saina clinched her fist on one of Sato's unforced errors.

Shaken by the setback, Saina roared back in the decisive third game. The Indian took a comprehensive 11-5 lead, but, continuing her never-say-die attitude, Sato reduced the deficit to 9-13.

The Indian ace, however, was in no mood to slip and emerged triumphant after reeling off four successive points.

A jubilant Saina let out a huge scream after winning the title, which also made her richer by US $18,750.