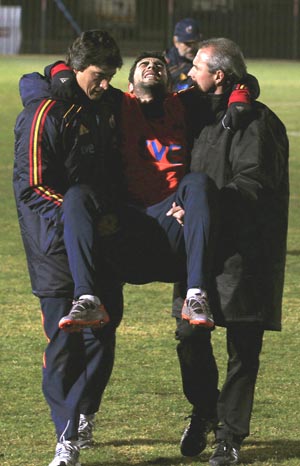 Spain central defender Raul Albiol was carried off the training pitch in severe pain on Saturday but tests later showed the injury was not as serious as first feared.

It initially appeared Albiol, who was an unused substitute in Spain's three Group H matches, had damaged the fibula bone in his right leg after landing awkwardly.

An X-ray had shown there was no bone damage, team doctor Oscar Luis Celada said later on Saturday in a statement on the Spanish soccer federation's website (www.rfef.es).

"We had a nasty shock, especially him," Celada said.

"In this case, we can rule out serious injury but obviously we will be monitoring his evolution in coming days," he added.

"Raul will remain with us here and we are all confident his development will be satisfactory."

© Copyright 2021 Reuters Limited. All rights reserved. Republication or redistribution of Reuters content, including by framing or similar means, is expressly prohibited without the prior written consent of Reuters. Reuters shall not be liable for any errors or delays in the content, or for any actions taken in reliance thereon.
Related News: Raul Albiol, Luis Celada, Spain
COMMENT
Print this article

Spain's Iniesta on road to recovery