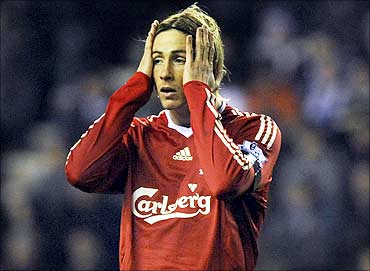 The striker looked to be near full fitness in training at Spain's base in Potchefstroom on Sunday as he continued his recovery from the knee surgery he had in April but caution seems to be the priority for the coach.

"I don't think he'll play the first match, although he is not ruled out either," Del Bosque said in an interview with Spanish television broadcaster Telecinco late on Saturday.

The former Real Madrid coach was more upbeat about Andres Iniesta, who tweaked a thigh muscle in Tuesday's crushing 6-0 win over Poland in a friendly in Murcia.

Creative midfielder Iniesta, a key member of the side, spent about half of Sunday's training session playing one-touch with his team mates before continuing his recuperation apart from the group as they practised attacking on one half of the pitch.

"I think he (Iniesta) could be available for the Switzerland match," Del Bosque told Telecinco.

Another Spain injury concern, midfielder Cesc Fabregas, told a post-training news conference on Sunday his recovery from a cracked bone in his leg is proceeding well.

"Every day I'm getting better and stronger," said the Arsenal captain, who missed the end of the Premier League season.

"I am feeling really confident and I can almost say that I am 100 percent," he added. "The good thing is that I am training with the team, I have not lost anything due to the physical problems and that's the best thing that can happen."