Nigeria have played down the threats on the life of midfielder Sani Kaita, suggesting the scare might be the result of a misunderstanding over the use of language in the West African state. 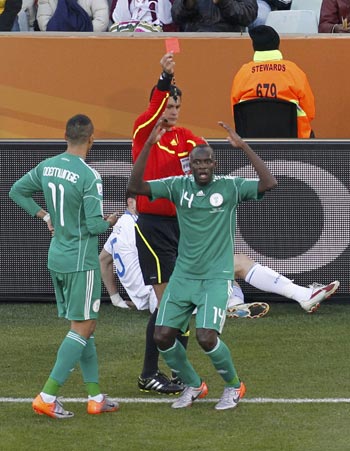 Kaita was dismissed for kicking a Greek defender on the touchline last Thursday as Nigeria lost 2-1 to Greece, their second defeat at the World Cup.

On Sunday, team spokesman Peterside Idah said the player had received "more than 1,000 threats to his email from within Nigeria" and the team were "taking these threats very seriously".

"There's nothing official that's really come out that there's been a threat on Kaita's life," Idah said on Monday.

"It's just rumours and his friends talking about it. There's nothing official that we can begin to panic.

Midfielder Dickson Etuhu said although the players sympathised with Kaitu, they would not allow the threats, real or rumoured, to impact on their decisive Group B match against South Korea on Tuesday.

"At the end of the day of, we are all professionals and we have been playing under pressure for a long time," he said. "We have to deal with it.

© Copyright 2021 Reuters Limited. All rights reserved. Republication or redistribution of Reuters content, including by framing or similar means, is expressly prohibited without the prior written consent of Reuters. Reuters shall not be liable for any errors or delays in the content, or for any actions taken in reliance thereon.
Related News: Sani Kaita, Peterside Idah, Nigeria, Dickson Etuhu, Kaitu
COMMENT
Print this article