Why I am praying for Brazil to lift the Cup

I am at this huge party in the South African embassy, here in Brazil. It is the opening match of the FIFA World Cup and with his imagination the South African ambassador -- a close friend and a fellow partner for me in IBSA (India, Brazil, South Africa) -- has organised a large screen, crates of cold beer, platters of barbeque and has invited the whole town. Many invitees around me are wearing their national team T-shirts, but I am drowned in a sea of mainly yellows -- the famous Brazilian football jersey colour.

South Africa has scored the first goal of the tournament, a real scorcher against which the Mexican goalkeeper is helpless. The screaming and the droning noise of the vuvuzelas around me are deafening. Brazilians are dancing too, as they have nothing at stake in this match. 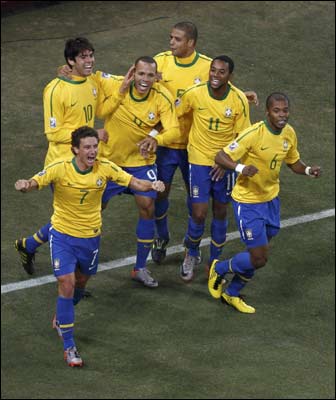 "Is India in the World Cup? When is your first match?" the question that I face twice a day these days is now being asked by an elderly Brazilian who cannot dance at his age. I tell him with some embarrassment that 'Sorry, no, India is not in the World Cup, never was,' etc.

"Why?" He asks, again a familiar question for me in Brazil.

Because football is above all a fiercely collective game and we are incapable of it, being individualistic? Because the 'Goal' for the individual in our civilisational ethos is nothing less than Moksha or Nirvana or total liberation, and this spirit does not support a fire in the belly for putting the ball in the rope net and calling it a goal?

Because cricket consumes all our passion and resources and even our politics?

Because in Bengal the cradle of our football, today talk is even more important than action? I don't know but I don't have to answer. Fortunately all around me there are shouts as the Mexicans now near the goal.

But I am mellowed in the yellow crowd.

To be in Brazil even at normal times is an experience. To be in Brazil during the World Cup is something else. For weeks now, I have been seeing strange stories in the newspapers and have to consult my Brazilian colleagues to decipher them.

'Import duty on beer reduced from 18 per cent to 3 per cent,' is the headline one day. Why? Because the government has come to the belated realisation that domestic beer production just cannot meet the peak demand during the World Cup, especially if the Brazilian team does well. For its own popularity in an election year it has taken the decision for an import surge of beer. The same is expected for potato chips.

'Offices to close at 2:30,' says the papers. Our Brazilian employees educate me about the imperative to close the embassy at that time on the day the Brazilian team is playing as the matches are televised at 3 pm. At that hour the country sits still and there is no question of any one working. We happily comply.

'Do not fly the flag on the official car, Sir,' advises my driver, though it is the diplomatic convention for the national flag on the ambassador's car. Why? Millions are flying the Brazilian flag on their cars during the World Cup and a foreign looking flag will upset them, especially if they have lost on any particular day. Sensible advice. Why be provocative?

I have known the importance of football in Brazil and even wrote a column in my early months in this country aptly titled 'In Brazil, the ball is the world'. I had explored the historical, sociological and psychological aspects of the Brazil-Football equation and also compared it with the India-Cricket fixation. But all that had not prepared me for the total immersion and absorption that I now see as Brazil aspires for its sixth win in the World Cup, having won a record five over the years.

But it is acknowledged even by the most passionate fans that the game today is different from that of the classical era and that to win is a big challenge. From the fifties to the nineties Brazilian and in general Latino football represented individual flair, innovation, unorthodoxy and 'devil may care' attitude. This was in contrast to the European style: Team-oriented, practiced perfection, physical, fast and serious to the core.

Today in a highly globalised and commercialised football world dominated by leagues rather than nations, famous Brazilian players are always in Europe with lucrative contracts.

Playing under the national flag imposes new demands in team effort, style and discipline. Secondly, the Brazilian coach Dunga has sacked even celebrities including someone of the stature of Ronaldino, putting emphasis on collectivity rather than celebrity. All this has led to uncertainty and worry about the fate of the national team.

No one can grow up in this country without knowing the legendary story of 'the saddest day in Brazilian football.' This was sixty years ago, on July 16, 1950, the first World Cup organised after the war and that too in the most famous playground, the Maracana stadium in Rio de Janeiro, the Mecca of football.

Brazil was the overwhelming favourite and in the last match was pitted against its tiny neighbour, Uruguay. The capacity home crowd of 210,000 people geared for victory celebrations were devastated by the defeat of their home team to Uruguay in a 2-1 finish in the dying moments. This is a tragic legend in Brazil comparable only to the Battle of Plassey or Panipat in our imagination.

Believe it or not, I came across the following two gems from the Brazilian press on that episode: 'Our catastrophe, our Hiroshima was at Marcana, the defeat by Uruguay in 1950,' and another one: 'The goal in 1950 and the gunshot that killed Kennedy both have the same drama, the same movement, the same precision of an inexorable trajectory leading to a tragedy.'

I see this worry deepening as Brazil plays its first match against North Korea. Brazil wins 2-1 no doubt, but whoever expected the mysterious North Koreans at world rankings number 135 give such a running to the world number one team. Predictably there is a lot of expert analysis in the bar where we see the match. The team is too slow, the rhythm is lacking, the stars are missing etc combined with more complacent comments about 'after all this is the first match; we are always like that only.'

"Which is your favourite team?" Brazilians ask me frequently. This one is easy. Not only for me and not only now but Brazil has always been the favourite team for Indians for decades. The latest survey by Outlook-Mudra confirms that 43 per cent of Indians regard Brazil as their favourite, followed by the team from neighbouring Argentina.

There is also the explanation as to how a newly independent India started loving the Brazil team from the early fifties, as it was the only team with blacks, browns, and whites, an original rainbow nation. Also we fell in love with the players with such magical names: Zico, Socrates, and the one and only Pele. I say all this liberally around me and become popular.

But as I write this, these are early days as yet in the World Cup. Everything is possible in every match as the teams are so comparable and competitive. But with all the prospects of a fun party after each win, I pray every day with all the Brazilians that they lift the Cup. What better can I do for goodwill for India in this country?

B S Prakash is India's Ambassador in Brazil and can be reached at ambassador@indianembassy.org.br

Also read: Of Brazil and memories of another Cup
In Brazil the ball is the world