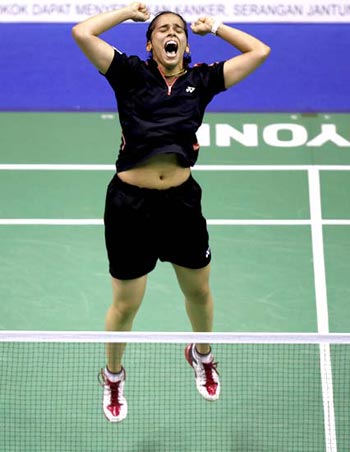 Top seed Saina Nehwal rallied from behind to beat Mew Choo Wong of Malaysia 20-22, 21-14, 21-12 and clinched the women's singles title in the Yonex-Sunrise India Grand Prix badminton tournament in Chennai on Sunday.

After dropping the keenly contested first game, Saina held the temperament and clawed her way back into the contest by pocketing the second game.

In the deciding game, the second seed Malaysian often came up with deep returns and powerful smashes close to the back line. Wong score winners twice finding the vacant spots behind Saina, but it was short-lived as the world number six Indian was able to score points almost at will.

Both Saina and Alamsyah, who won his maiden major title, collected 7000 ranking points.

"I was nervous at the beginning and committed too many errors. In the normal course, I should have won in two games, but this being my first tournament in two months, I was nervous. But in the second and third games, I played aggressively," Saina said.

"I am happy to win the tournament and that too at home, and yes, it's a good preparation for the two Super Series events (in Singapore and Indonesia) I am participating this month. In fact, I am playing Wong in the first round at Singapore event," Saina said.

On the other hand, Wong gave credit to her rival saying Saina was just too good for her.

"I have played her before and I tried my best, but today, she was too good for me, especially in the second and third games," said Wong, ranked 22, through an interpreter.