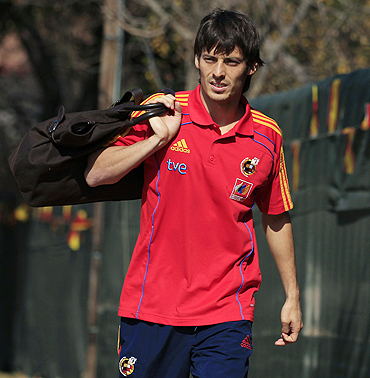 The 24-year-old underwent a medical on Wednesday having agreed a four-year contract. City's website did not disclose the fee but the Abu Dhabi-owned club are reported to have paid around 24 million pounds for Silva.

City, who announced the signing of Silva in June, finished fifth in the Premier League last season but will be expecting a top-four finish this season and a place in the Champions League.

"I will be happy if at the end we are in the Champions League - or if we win a trophy," Silva told the club's website.

"My first target is to get into the team, and then to fight for the league and the other competitions."

"Roberto Mancini and Garry Cook have told me we are building a very good team with some of the best players in the world and we are going to fight for honours," added Silva, who will have a holiday before joining his new team.

© Copyright 2021 Reuters Limited. All rights reserved. Republication or redistribution of Reuters content, including by framing or similar means, is expressly prohibited without the prior written consent of Reuters. Reuters shall not be liable for any errors or delays in the content, or for any actions taken in reliance thereon.
Related News: Manchester City, David Silva, Roberto Mancini, Jerome Boateng, Yaya Toure
COMMENT
Print this article