From a modest start, as player and coach, Bert van Marwijk built success with Feyenoord before taking over a promising Netherlands side following their disappointing quarter-final exit at Euro 2008. 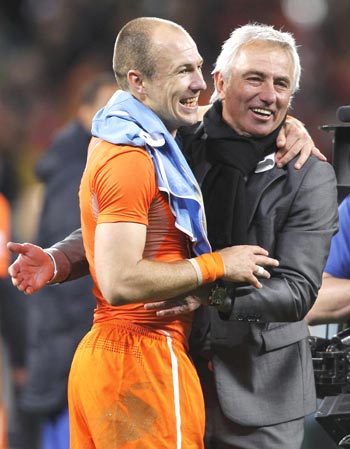 After guiding the Dutch to the World Cup final against Spain at Soccer City on Sunday, he has joined an exclusive club that includes the late Rinus Michels and Ernst Happel who achieved the same feat in 1974 and 1978 respectively.

A calm, conservative figure, the 58-year-old Van Marwijk has kept faith with experienced players and with the formation and tactics his predecessor, Marco van Basten, drew up.

Van Basten failed to steer his team through the knockout phase on two occasions but Van Marwijk started with a mission in July 2008 which had one sole goal, winning the World Cup.

He was a conventional winger during his 19-year playing career and won only one international cap, in 1975.

After seven years of coaching amateur teams, Van Marwijk joined top-flight Fortuna Sittard, taking them to the 1999 Dutch Cup final where they lost to Ajax Amsterdam.

His greatest successes came with Feyenoord who he led to a UEFA Cup triumph in 2002 before winning the Dutch Cup on his return to Rotterdam after a two-year stint with Borussia Dortmund in Germany.

When he took over the national side, Van Marwijk asked former Netherlands internationals Frank de Boer and Phillip Cocu, who between them have more than 200 caps, to assist him.

He has kept faith with players who have served their country well in the past, such as defenders Giovanni van Bronckhorst and Andre Ooijer, despite modest recent league form.

Both gambles have paid off with Van Bronckhorst, who has played every minute so far, scoring the opener in the semi-final and Ooijer more than able to fill in for the quarter-final against Brazil when he replaced the injured Joris Mathijsen.

Van Marwijk, whose contract has already been extended until the end of Euro 2012, steered Netherlands smoothly through qualifying with eight wins out of eight, although a group containing Macedonia, Scotland, Iceland and Norway offered little chance to see his players fully tested.

At the World Cup the Dutch have extended their winning streak in competitive matches to 14 with five-times champions Brazil their biggest scalp at the quarter-final stage.

If his balanced team adds a 15th victory to their already impressive streak Van Marwijk will cast a glorious shadow over a long list of successful and innovative Dutch coaches by becoming the only one with a World Cup winners' medal.

© Copyright 2022 Reuters Limited. All rights reserved. Republication or redistribution of Reuters content, including by framing or similar means, is expressly prohibited without the prior written consent of Reuters. Reuters shall not be liable for any errors or delays in the content, or for any actions taken in reliance thereon.
Related News: Bert van Marwijk, Van Bronckhorst, Marco van Basten, Feyenoord, Frank de Boer
COMMENT
Print this article