Two goals from Ronaldinho helped AC Milan to a 3-0 win at toothless Juventus on Sunday which piled the pressure on Juve's rookie coach Ciro Ferrara.

Alessandro Nesta netted in the first half and Ronaldinho twice after the break to push Leonardo's side eight points behind leaders Inter Milan, who beat Siena 4-3 on Saturday. 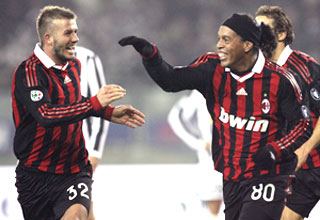 Second-placed Milan, who have a game in hand and meet Inter on January 24, condemned Juve to their fourth defeat in five matches in all competitions and reports linking the Turin club with Russia coach Guus Hiddink have already re-emerged.

The visitors were far from spectacular on a cold night but third-placed Juve's confidence is so low that an average display was enough to win handsomely.

Juve midfielder Felipe Melo, much derided for his poor form since a July move from Fiorentina, failed to clear a corner on the half hour and Nesta could not miss at the far post.

Milan doubled their lead on 72 minutes when Ronaldinho's header from a corner was deflected in by Paolo De Ceglie and the Brazilian added the third from David Beckham's cross late on.

The hosts, with a raft of injuries, had their best half-chance when Dida denied defender Giorgio Chiellini.

"Inter won yesterday so we had to win this game to stay in the race," Milan's Pirlo, back to his best after the whole team struggled in Leonardo's first months in charge, told Sky TV.

Substitute Denis came on in the first half for injured compatriot Ezequiel Lavezzi and put in a man-of-the-match display for coach Walter Mazzarri, who left as Samp boss in May.

Napoli have gone 12 games unbeaten under Mazzarri, who replaced Roberto Donadoni in October and is hoping to return the club to the glory days of Diego Maradona in the 1980s.

Fiorentina, who like Napoli went bust in the previous decade, also continued their pursuit of the fourth Champions League spot they bagged last season with a 2-1 win over Bari.

Cesare Prandelli's side have a game in hand and lie three points behind Napoli while fifth-placed AS Roma are two above the Florence club following Saturday's 1-0 win over Chievo.

Palermo are level with Fiorentina after Edinson Cavani's second-half penalty secured a 1-0 home win over strugglers Atalanta, who are poised to appoint Lino Mutti as Antonio Conte's successor as coach according to media reports.

© Copyright 2022 Reuters Limited. All rights reserved. Republication or redistribution of Reuters content, including by framing or similar means, is expressly prohibited without the prior written consent of Reuters. Reuters shall not be liable for any errors or delays in the content, or for any actions taken in reliance thereon.
Related News: Juve, Napoli, Ronaldinho, AC Milan, Fiorentina
COMMENT
Print this article