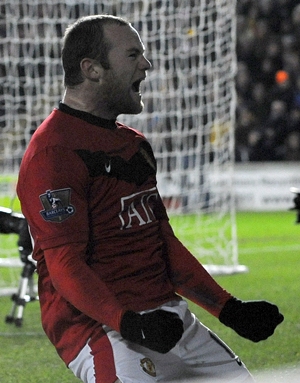 Wayne Rooney was involved in every goal as Manchester United beat struggling Hull City 3-1 on Sunday to slash Chelsea's lead to two points in the Premier League.

The result lifted champions United back ahead of Arsenal, who defeated fourth-placed Aston Villa 3-0 with Spain midfielder Cesc Fabregas coming off the bench to score two second-half goals, into second place.

Stuttering Chelsea faltered on Saturday when they failed to score for the first time in 34 games and were held to a 0-0 draw at Birmingham City.

Chelsea have 42 points from 19 games, Manchester United are on 40 from the same number and Arsenal have 38 but with a game in hand.

Rooney fired United ahead from close range on the stroke of halftime at the KC Stadium but allowed Hull back into the game with a woeful back pass in the 58th minute that led to a Craig Fagan penalty.

The England striker redeemed himself when his cross was turned in by Andy Dawson for a 73rd-minute own goal that put United back in front.

Dimitar Berbatov made it 3-1 by tapping in at the far post eight minutes from time, Rooney setting him up with a perfect pass.

"He made a mistake in giving away the ball for a goal, that was his one bad moment in the game," said manager Alex Ferguson of Rooney's contribution. "But I thought he was exceptionally good today.

"He's a natural winner, always had a great attitude and determination to do well and he would be more sick than anyone that he made a mistake. He rectified it in a nice way," he told Sky Sports television.

Arsenal had briefly occupied second spot after Fabregas lit up the Emirates Stadium before limping off injured six minutes from the end.

With the third and fourth-placed sides deadlocked at halftime, Fabregas came on for Brazilian midfielder Denilson in the 58th minute and immediately added steel to the Londoners' title challenge.

The Spaniard won a free kick on the edge of the area in the 65th after being downed by Richard Dunne and his perfectly-flighted shot from 25 metres sliced through the wall and curled into the top corner.

Fabregas bagged his ninth league goal of the season in the 81st after being put through by Theo Walcott but he limped off soon afterwards.

Abou Diaby made it 3-0 when he muscled through the midfield and fired a low shot past Brad Friedel in the last minute of normal time.

"It's a recurrence of his hamstring," Wenger told Sky when asked about Fabregas's condition. "We knew before the game that it was not perfect, I decided to put him on the bench.

"But we were in the situation where he was needed. We will see if we will have long regrets or short regrets," added the Frenchman.

"I don't believe it is too bad. He doesn't think it is too bad...if it is a pull again then this time it is three weeks so let's hope its only a little bit of scar tissue," Wenger said.

Villa, who have already beaten Chelsea, Manchester United and Liverpool, had been hoping to become the first club since Leeds United in 1994-95 to defeat each of the big four in a single season.

© Copyright 2021 Reuters Limited. All rights reserved. Republication or redistribution of Reuters content, including by framing or similar means, is expressly prohibited without the prior written consent of Reuters. Reuters shall not be liable for any errors or delays in the content, or for any actions taken in reliance thereon.
Related News: Chelsea, Manchester United and Liverpool, Wayne Rooney, Cesc Fabregas, FABREGAS DOUBLE Arsenal
COMMENT
Print this article