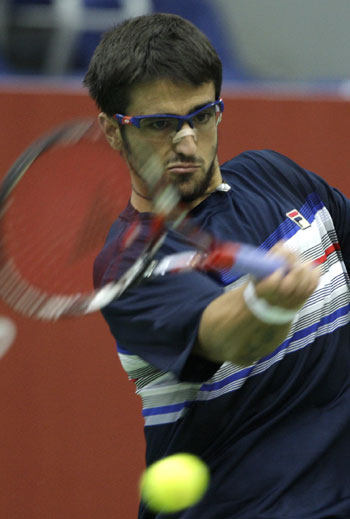 Defending champion and second seed Marin Cilic led a procession of seeds into the semi-finals of the Chennai Open on Friday, a day marred by incessant rain and the subsequent delay in matches.

Cilic beat Colombian Santiago Giraldo 7-6 (3), 6-1 in the day's final singles quarter-final to set up a last four meeting with the in-form fourth seed Janko Tipsarevic, the Serbian managing to eventually brush aside the challenge of Dutch rookie, Thiemo De Bakker, 7-5, 7-5.

The Swiss player will next play Dudi Sela in the last four, the sixth seed from Israel scoring a facile 7-6 (3), 7-5 win against Lukas Lacko of Slovakia in his last eight match.

On a day when rain returned to haunt the quarter-finals at Chennai -- for yet another year -- delaying play considerably, the organisers were forced to start three last eight matches simultaneously.

Cilic struggled early on, dropping serve, as the Colombian raced to a 4-1 lead in the opening set. But the defending champion slowly clawed his way back into the match, forcing a tie-break and dominating that from the start.

And once he had the first set in the bag, the second seed from Croatia wasted no time in racing through the second.

"It was a tough match. He played really well at the start," said Cilic later. "My serve improved as the match progressed and I started to get more balls in court.

"Obviously the tie-break was the crucial point of the match and it's great to get through to the semi-finals," added the holder.

Cilic, a firm favourite to retain his title since top seed Robin Soderling's exit in the first round, has never lost a match against the opponent he faces on Saturday. The 21-year-old beat Tipsarevic on three successive occasions, all of them last year, including a quarter-final win en route to his title triumph here.

Earlier, the Wawrinka-Berrer match was a closely-fought one, with both players matching each other's level of play. However, when it came to the crucial points, it was the Swiss who had the advantage over the German veteran.

The opening set was a tight affair. It went on serve, with both players holding comfortably, till the sixth game when Wawrinka secured himself a couple of break-point opportunities. And a ripping forehand winner ensured him his first break and a 4-2 lead in the set.

Berrer hit back immediately, breaking Wawrinka's serve and holding his own comfortably to square the match at 4-4. The 35-year-old German had two more break-points in the 11th game but Wawrinka saved both, setting the stage for a tie-break.

The pair traded early breaks in the tie-breaker but the Swiss soon opened up a 5-3 lead and held on to win it 7-5.

Wawrinka had two opportunities to break Berrer's serve in the first game of the second set but failed to take advantage. However, opportunity knocked the Swiss player's doors again in the seventh game and on this occasion the 24-year-old grapsed it with both hands, first breaking Berrer's serve and then holding comfortably to open up a 5-3 lead.

And Wawrinka was never going to lose after that.

"It's a really good first tournament of the year for me so far," admitted the Swiss. "To win in straight sets is great," he added.

The third seed was dismissive of the rain delay.

"On the Tour, we're used to waiting to play because of the rain," he reasoned. "It's part of the job, pretty easy to handle.

"They put me as first match so it wasn't a problem at all."

Meanwhile, Tipsarevic had to come from behind in both sets in his match against the unheralded De Bakker to secure a third ATP semi-final berth in his last four tournaments -- after Moscow and Vienna last year.

The Serbian, who had beaten former champion Carlos Moya and last year's finalist Somdev Devvarman in his first two matches, started on a tentative note. Having failed to convert an opportunity to break De Bakker's serve in the third game, Tipsarevic witnessed the Dutchman break his serve instead and race to a 4-1 lead.

However, the Serbian clawed back into the set, breaking in the seventh game and holding his own serve to square things at 4-4.

De Bakker gave Tipsarevic two further opportunities to break his serve in the 11th game and the fourth seed obliged, converting the second. Having got himself to a 6-5 lead -- after trailing 1-4 -- Tipsarevic duly held his own serve to pocket the opening set.

However, the Dutchman started the second set on a stronger note, breaking the Serbian's serve in the second game, to open up a 3-0 lead. But, as it had happened to him in the opening set, De Bakker failed to make his opportunities count. The 21-year-old allowed the Serb the break back in the fifth game and square at 3-3.

But the Dutchman recovered the break in the eight game only to lose his advantage yet again in the next. And in the 11th game, it was the fourth seed who drew final blood, breaking De Bakker again to put the issue beyond doubt.

The Serb kept his calm to hold serve and secure the match in his favour in the next game.

"I'm really happy that I'm in the semi-finals. But I'm not happy with how I played today," admitted Tipsarevic after the match.

"The only satisfaction today is how I fought, being down in both sets but still managing to find a way to win in straight sets. But if I play like I did today in the semi-finals, it will be bad," added the Serb.