From bearing the expenses of their ceremonial clothing to daily allowances of $50 per day, the sports ministry on Tuesday said it has spent around Rs 7.4 lakh on the eight-member Indian contingent at the Winter Olympics in Vancouver, Canada. 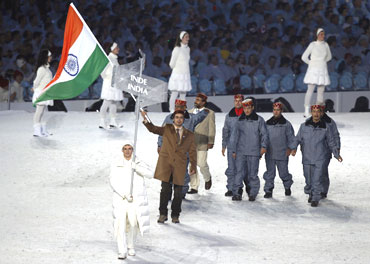 The ministry's statement comes after luger Shiva Keshavan claimed that the team was given "horrible" attire for the event's opening ceremony.

Keshavan's comments had prompted the Indo-Canadian community to raise funds for the team, which ultimately refused the money saying that it would not accept "charity".

Chef-de-mission R K Gupta had criticised Keshavan for his statements and the luger had retorted by demanding Gupta's resignation, calling him incapable for the job.

The Sports Ministry insisted that all financial help was provided to the contingent.

"Government of India has provided all possible funding for the training and participation of Indian athletes at the Winter Olympics," the ministry said in a statement.

"Out of pocket allowance is $50 per person per day for three sportspersons and four coaches. This comes to around Rs 7.4 Lakhs," it added.

The ministry said it has provided "full assistance for their almost three-month-long training.