Chen Jin has set his sights on dethroning compatriot Lin Dan as China's number one player. 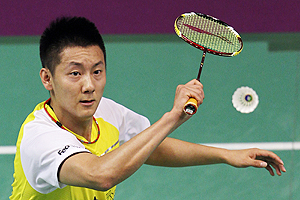 Seeded fourth at the world championships, Chen spoke of his ambitions after reaching the second round with a 21-14, 21-14 success over Ville Lang of Finland.

"I have set a target to win the title here in Paris and to achieve that I have to be on my best form," he told the BWF website www.internationalbadminton.org.

But he added: "Of course I want to be the top player in China and contrary to what some may think - that I have to wait until Lin Dan retires - I intend to work my way towards that target now."

Lin beat Chen to the world title in the final in Hyderabad last year but Chen had beaten him in the 2008 All England final.

In the absence in Paris of injured Indonesian Sony Dwi Kuncoro, the bottom half of the draw containing Chen looks easier with Lin and world number one Lee Chong Wei in the top half.

But Chen cautioned: "These days every player must be treated with respect."

Lin Dan breezes into 2nd round at Badminton Worlds