Defending champion Lin Dan of China and top-seed Malaysian Lee Chong Wei advanced to the second round after notching up straight-set wins over their rivals in the World badminton Championship in Paris on Monday. 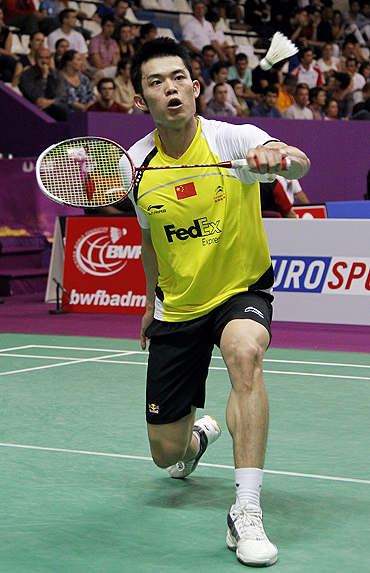 The Chinese ace was brilliant on court even though he disputed a line call despite being 19-10 in the lead in the second set.

World number one Lee took 26 minutes to beat his first round opponent Kevin Cordon of Guatemala 21-7, 21-11.

It was a light work-out for Lee as he moved on the court with ease. There were moments when Kevin had him pinned to the back court but Lee came out of it easily.

The Malaysians hardly broke sweat racing to a 5-0 lead before wrapping up the set with neat net play.

The second was no different as Chong Wei led 7-2 except for a brief period when Kevin tried to fight back but the class of the Malaysian was just too high as he wrapped up the match in 26 minutes.

"It's good to start the tournament after the few days of waiting. I had a good feel of the court and playing conditions and am looking forward to a good outing," said Chong Wei.

"There is a slight draft but I doubt it will worry anyone. And as for the hall not having air conditioning, I believe its no advantage to the Asians as most of the European players too are accustomed to these conditions," he added.

Fifth seed Taufik Hidayat of Indonesia also eased into the second round, disposing off Ola Fagbemi of Nigeria 21-10,21-10 in 24 minutes.

"It is humid in the courts and it will take time getting used to as it is not easy to breathe in these conditions. Guess it is the same for the other players as well but over the next few days we will get used to it," Taufik said.

"I am looking forward to the rest of the week with optimism and hopefully make it all the way to Sunday's final."

Other seeded players in the morning sessions also registered easy wins in their matches with none being stretched to three sets.

The Koreans also had a good day in office as Park Sung Hwan, seeded 13, moved to the second round with a easy 21-9, 21-18 victory over Derek Wong of Singapore.

In the women's singles, Petya Nedelcheva of Bulgaria overcame the challenge of Judith Mevlendijks of the Netherlands 14-21, 21-16, 21-10 after a 55-minute battle.

Petya, who is seeded 15, suffered a nose bleed in the first set and required medical attention before going on to book her second round berth.

© Copyright 2021 Reuters Limited. All rights reserved. Republication or redistribution of Reuters content, including by framing or similar means, is expressly prohibited without the prior written consent of Reuters. Reuters shall not be liable for any errors or delays in the content, or for any actions taken in reliance thereon.
Related News: Malaysian Lee Chong Wei, Lin Dan, Kevin Cordon, Petya Nedelcheva, Taufik Hidayat
COMMENT
Print this article