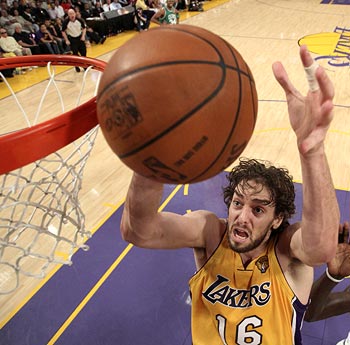 Pau Gasol, a two-time National Basketball Association (NBA) champion and a three-time All-Star, will travel to Mumbai and Delhi next week to further the growth of basketball and the NBA in the world's second-largest nation.

This is the first time a reigning NBA champion will travel to India to conduct events on the NBA's behalf.

The league is in the midst of hosting a record number of events in India this summer. Gasol, a member of the two-time defending champion Los Angeles Lakers, is the second NBA superstar to visit India this month following Orlando Magic center Dwight Howard's visit to Bangalore and Delhi from August 10 to 14.

"I have always wanted to visit India and I am very excited to represent the Lakers and the NBA in a country where basketball is on the rise," said Gasol, who would be visiting India from August 23 to 28. "As an international player in the NBA, I know how important it is to do my part to grow the game globally and would love to compete against a player from India in the NBA one day."

Gasol will make appearances with the Larry O'Brien Trophy to take photos with fans in Mumbai and Delhi.  This will be the first time that the trophy will be in India.  He will also conduct clinics in Mumbai on August 26 for participants of the Mahindra NBA Challenge, the league's first community-based basketball league in India, which tipped off in Mumbai, Bangalore, and Ludhiana this summer and attracted thousands of participants, including top players from each city.

Gasol will also conduct an NBA Cares clinic on August 28 in Delhi at the Father Angel School in Gautam Nagar, a missionary school that serves underprivileged communities. NBA Cares is the league's social responsibility platform and these clinics will continue the NBA's commitment to using the sport of basketball to engage communities and promote healthy, active lifestyles.

"Giving youth in India the unique chance to step onto a court and learn from a reigning two-time NBA champion will inspire more athletes to play the game of basketball," said NBA president of International Heidi Ueberroth. "Pau is a great ambassador for the NBA and his visit is part of our continued efforts to work with our partners to increase participation in communities throughout India."

"Our goal is to increase basketball participation and improve the level of play in India and we are thrilled that the NBA shares our long term commitment to accomplish these goals," said BFI Secretary General Harish Sharma. "Our collaboration with the NBA has generated a tremendous amount of interest for the sport in India, including the recent visit of All-Star Dwight Howard, and the arrival of NBA world champion Pau Gasol will help popularize the game even further."