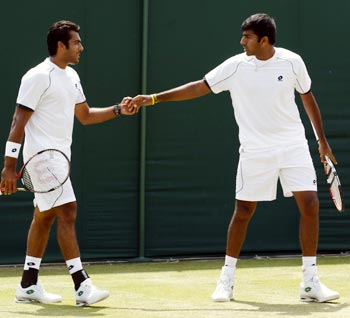 Rohan Bopanna and Aisam-ul-Haq Qureshi pulled off the biggest win of their career by upsetting world record holders Mike and Bob Bryan in the quarter-finals of the Legg Mason Classic event in Washington.

The unseeded Indo-Pak pair recorded a stunning 7-6 (6), 7-5 win over the world number two pairing, who have a record 62 titles against their name, to avenge last week's defeat at the Farmers Classic.

Bopanna and Qureshi will take on Mardy Fish and Mark Knowles in the semi-finals of the US$ 1,165,500 ATP 500 tournament.

"This victory is really satisfying on many levels. After the Bryan brothers beat us last week, this win shows that we were able to analyse what went wrong with our game and correct those faults to come back and win convincingly against these very tough players.

"Both Aisam and I know that our game has been improving steadily and we have the confidence and ability to be amongst the best. Our plan was to play aggressively from the start, and that's what we successfully did," Bopanna said after the win.

Bopanna and Qureshi fired 17 aces as they sealed victory over the reigning ATP World Tour Doubles Champions in 80 minutes.

The unseeded pairing converted one of the five break points they created to seal victory in the 12th game, as Mike Bryan finished with two double faults.

Bopanna-Aisam in semis of Farmers Classic