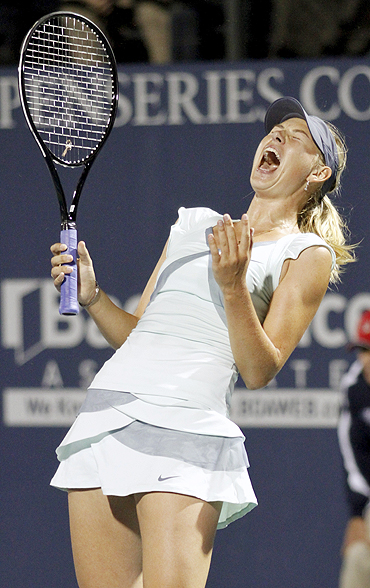 Maria Sharapova battled to a 6-4, 1-6, 6-2 victory over in-form Russian compatriot Svetlana Kuznetsova to reach the second round of the Cincinnati Masters on Tuesday.

While the 10th seeded Sharapova was successful on her Cincinnati debut, top seed Jelena Jankovic opened the defence of her crown with a familiar taste of victory at the venue, a 6-4, 3-6, 6-1 second round win over Russia's Vera Dushevina.

Kuznetsova arrived fresh off a victory in San Diego on Sunday and her first round clash against Sharapova did not disappoint as a contest between two multi-Grand Slam winners returning to form.

Sharapova, winner of three Grand Slams including the 2006 US Open, broke Kuznetsova in the ninth game of the opening set to take early control of their match.

But Kuznetsova, the first Russian to win the US Open with her victory in 2004, roared back into the match by sweeping through the second set in just 30 minutes.

"I let her off the hook in the beginning of the second set, and she went with it. Against a player with a lot of experience, you can't do that," Sharapova told reporters.

In the third, former world number one Sharapova once again benefited from her never-say-die approach by taking the initiative and surging 3-0 ahead before she broke Kuznetsova a second time in the decider to close out the match.

"It's definitely tough to have a night flight then come and play the day after a final, but it's just bad luck, I cannot change it," Kuznetsova said.

"I just need to get my ranking higher and then I can get a bye. But I also have to give a lot of credit to Maria. She played really well in the third."

Wildcard Christina McHale will carry American hopes into the next round, advancing when 15th seed Nadia Petrova was forced to retire because of heat illness while trailing 7-6, 5-3.

McHale's teenage compatriot Melanie Oudin, who became the darling of last year's US Open by reaching the quarter-finals, will have a little more time to prepare for Flushing Meadow this year after losing 6-2, 6-3 to Russia's Elena Vesnina.

"I'm hoping the hype won't be that bad this year, but I have a feeling it's going to be," Oudin told reporters after her first round exit. "People are going to expect I can do it again.

"But this year I'm going to go into it just like last year. No expectations."

Sixteenth seeded Frenchwoman and 2007 Wimbledon finalist Marion Bartoli was the first player to reach the third round when she overcame Ukraine's Alona Bondarenko 7-6, 6-1.

© Copyright 2022 Reuters Limited. All rights reserved. Republication or redistribution of Reuters content, including by framing or similar means, is expressly prohibited without the prior written consent of Reuters. Reuters shall not be liable for any errors or delays in the content, or for any actions taken in reliance thereon.
Related News: Svetlana Kuznetsova, Maria Sharapova, Melanie Oudin, Christina McHale, Cincinnati Masters
COMMENT
Print this article