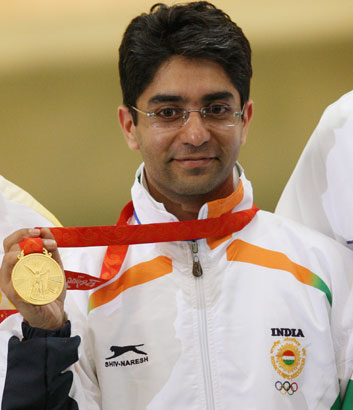 The gold medal fetched by rifle shooter Abhinav Bindra in the 2008 Beijing Olympics, the country's first-ever individual yellow metal in the Games long history, has been chosen by All Sports magazine as the greatest Indian sporting achievement of all time.

The magazine, in its third anniversary special issue of April 2010, has also nominated chess ace Viswanathan Anand as the greatest-ever sports person from the country.

Anand got this accolade "for his feat of winning three chess world championships in different formats as well as numerous other tournaments in the elite division and single handedly igniting a chess revolution in the country," said the magazine on Wednesday.

The Chennai wizard has usurped this distinction over the heads of other deserving claimants like Dhyan Chand, Sunil Gavaskar, Kapil Dev, Geet Sethi, Sachin Tendulkar, Anil Kumble, among others.

Controversially, the magazine's jury panel of contributors left out cricket icon Tendulkar from its top-ten list of Indian achievers/achievements in sports.

The Top 10 Indian sporting achievements of all time

6. Prakash Padukone's triumph at the All England Badminton Championship in 1980.

10. Ajit Wadekar's twin series triumphs in the West Indies and England in 1971.