Obama "high and outside" with baseball first pitch 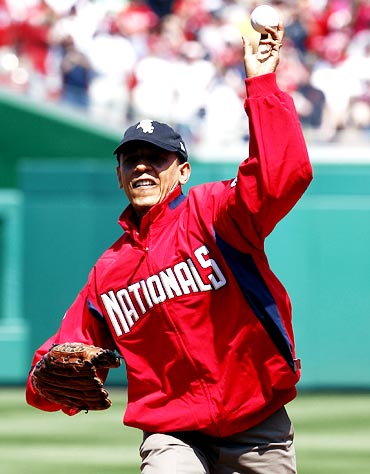 US President Barack Obama opened the 2010 Major League Baseball season on Monday with a ceremonial first pitch that even the athletic commander-in-chief acknowledged was a little bit off target.

Wearing the red jacket of the Washington Nationals, but a black cap from his beloved hometown Chicago White Sox, the rangy left-hander threw the Opening Day first pitch before the Nationals played the Philadelphia Phillies.

"A little high. A little high and outside," a grinning Obama said after his high, arching throw to Nationals third baseman Ryan Zimmerman.

Monday's event came 100 years after William Howard Taft, the 27th US president, became the first President to throw an Opening Day first pitch on April 14, 1910, Washington's baseball team at the time, the Senators, defeated an earlier Philadelphia team, the Athletics, by a score of 3-0.

After throwing the pitch, Obama appeared with the Nationals' local television broadcasters, who mildly berated him for wearing another team's cap.

Obama defended himself, noting that his home remains the South Side of Chicago.

"I wanted the Nats to do well. I love 'em. It's great for the city, but I'm a South Side kid," Obama joked.

He said he was "a little disappointed" with his pitch and criticized his own form when the broadcasters replayed it.

"This is heartbreaking right here. Released it a little high, a little early," Obama jokingly lamented as the announcers replayed his throw.

The President stayed at the game for three innings.

© Copyright 2021 Reuters Limited. All rights reserved. Republication or redistribution of Reuters content, including by framing or similar means, is expressly prohibited without the prior written consent of Reuters. Reuters shall not be liable for any errors or delays in the content, or for any actions taken in reliance thereon.
Related News: Barack Obama, William Howard Taft, Philadelphia Phillies, South Side of Chicago, Chicago White Sox
SHARE THIS STORYCOMMENT
Print this article